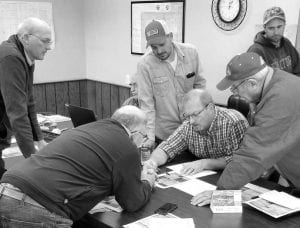 In a Monday, Jan. 6 meeting, the German Township Trustees and four landowners agreed to a project to place drainage tile along about 2,300 feet of Co. Rd. 25.

Rod Creager, chief deputy engineer with the Fulton County engineering office, told those at the meeting, storm water in the area is drained to Branch 6 of Flat Run Creek to the south, through a tile that starts on the Roger Stuckey property, runs behind Beck’s land and through the Nafziger field before reaching the creek.

The drainage line, made up of tile seven and 10 inches in size, was installed in 1908.

The proposal is to construct a new drainage tile in the west side right-of-way of Co. Rd. 25.

The group agreed to add a catch basin in the line that would connect to an underthe road line between the Nafziger and Valetta Stuckey properties.

Creager said projects done by mutual agreement between landowners avoid the petitioning process, which would involve the county commissioners in the project.

Kenneth “Skip” Leupp, township trustee, explained they could not oversee or construct the new drainage pipeline.

An opinion from Scott Haselman, county prosecuting attorney, states that the trustees are barred from doing the project unless the township is the only entity receiving benefit, which is not the case in the proposed work.

However, the trustees can pay for their portion.

Creager said based on historical records, the trustees would benefit from 2.7% of the total cost, which is estimated in excess of $7,000.

Beck said he receives no benefit from the drainage project, but his driveway would be torn up and his yard disturbed by the construction.

However, he said he would pay his 2.7% share if his driveway and his yard are restored.

“I want to do the right thing and be a good neighbor,” he said.

Doug Stuckey said the proposed new tile would be no benefit to Nafziger, but Nafziger said he is willing to pay his 32% share for the good of the area.

Having the most acreage involved in the project, Valetta Stuckey has the largest share of the cost, at 49.3%. Roger Stuckey’s share is 13.3%.

Dave Damman, of Damman Ditching, rural Napoleon, is the contractor. He anticipated starting work on the project, yesterday, Tuesday.