Truck Driver ‘On The Brakes’ Before Crash 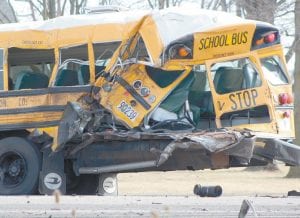 Justen Vocke, Henry County sheriff deputy and crash reconstruction specialist, said he is still working on the final report for the March 27 collision between a semi truck and an Archbold school bus.

Kelly Jay Braden, 48, Monroe, Mich., was driving a semi eastbound in the 23000 block of US 6 in Henry County when he struck the rear of a stopped school bus driven by JoAnn Cousino, 57, rural Archbold, at about 4:06 pm.

Two students had just stepped off the bus; two others were still on board.

None of the students were injured. Cousino and Braden were treated and released at the Fulton County Health Center.

Vocke said he is working on obtaining toxicology reports from FCHC to determine if either had alcohol or illegal drugs in their systems.

“Not that I’m suspecting anything, but just to clarify that,” he said.

In order to obtain the toxicology reports, Vocke said he must obtain subpoenas.

Several sets of marks on the road were left by tires of both vehicles.

“Leading up to the crash where the impact area was, those were from the semi; then, after the impact, the bus did lay down some scuff marks, for lack of a better term.

“When the bus was hit, it was accelerated by the semi, so it did lay down some marks,” he said.

Vocke said Braden “was on the brakes hard. There were very identifiable marks leading up to the crash from the semi.”

Cousino had her foot on the bus brake pedal at impact, he said.

Vocke said as part of his investigation, he will attempt to estimate the speed of the semi before the impact.

He has made a scale drawing of the crash scene, using surveying equipment. Using data from the skid marks, the distance the vehicles traveled after the crash, an inspection of the road surface, and other information, he will estimate the speed of the semi.

Vocke said he hopes to have the crash report completed in two weeks to a month.

“We don’t have anything major to wait on… I would hope it would be done within a month or a couple of weeks anyway.”

Jayson Selgo, Archbold superintendent said No. 8 “was not our ‘newest’ bus, but we had no plans of replacing it in the near future.”

The bus has been declared a total loss.

He added some of the Archbold elementary students made cards for the district bus drivers “thanking them for what they do.”