Trowbridge Ready To Give Up First Baby Of Year Title 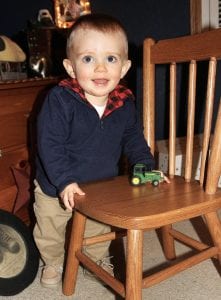 Tucker James Trowbridge, the Archbold Buckeye First Baby of 2017, with a toy tractor at his home in rural Archbold. As a farm boy, he’s already ridden on farm equipment, including a tractor and a combine. He’s logged an estimated 4,000 miles in the pickup traveling to hog shows. His first birthday will be Tuesday, Jan. 2, 2018.– photo by David Pugh

Almost a year ago, Tucker Trowbridge, then just seven days old, lay in the crook of the arm of his father, Tom, quietly napping through the first interview of his life.

His mother, Heather, suspicioned that Tucker’s interest in life would be in the barn of the farm, where there are tractors and pigs.

Today, Tucker is too big to lay in just one arm. He has grown from his birth weight of 6 pounds, 6.4 ounces to 17 pounds, and from 19 inches to 28 inches in length.

And rather than napping he sits on his father’s lap, in the same kitchen chair where he was held for that first interview, and looks with big eyes at the stranger in the house, making those unique baby sounds that will someday be words.

His mother’s prediction has started to come true. He likes to go to the barn.

“Dad gives you a little show whip,” Heather said, speaking to her son.

“He plays with that.”

“He’ll sit in the stroller with his whip and go across the front of the pen and let the baby pigs bite it,” Tom said.

In fact, some of Tucker’s first baby pictures were taken with pigs.

“When he was little, we’d bring them (baby pigs) in here (the house) because it was too cold to be out there (in the barn),” Tom said.

“We’ve had lots of pictures taken with piggies,” Heather said.

“You had your first picture taken with one when you were two weeks old,” Tom tells Tucker.

Even at less than a year old, Tucker’s already involved in work on the farm.

Heather said he’s ridden with his father on tractors.

Well, more than that.

“You shelled corn with him (a few weeks ago), didn’t ya?” Heather asks Tucker.

“He loves it,” Tom said, adding Tucker’s been along when they’ve hauled corn to the elevator.

“He sat in the truck six hours straight and never cried,” Tom said. He estimated Tucker’s logged 4,000 miles in the cab of their pickup.

His longest trip involved delivering a pig to Arcola, Ill., then heading to a show at the Illinois State Fairgrounds in Springfield, the state capital.

“Now if he’s in the car, in the back seat, and it’s dark out, he doesn’t ride very well. He can’t see. All he can see is the seat in front of him, because he’s facing backwards.

“He’s cried all the way home from Edon before.”

Returning from a basketball game at Edon, “Oh my, that was the most miserable ride. He cried the entire way home,” Heather said.

Tucker came into the world with a mop of brown hair. Heather said it started out dark, then lightened over the summer. Now, it’s getting dark again.

“He’s probably had four or five haircuts. About every three weeks,” Heather said.

But his eye color has not changed.

“Still got your baby blues,” she tells the boy.

Tucker is crawling, but walking isn’t far away.

“We’re pulling ourselves up onto the furniture and standing. He’ll hang on and walk around the coffee table, or down the couch,” Heather said.

Tucker likes bananas, macaroni, and pudding. Heather said he’ll east most of his veggies, but pears are out “because of the texture of them,” she said, adding, “He doesn’t like applesauce, we found that out. He makes awful faces” when he tries it.

He’s been sleeping through the night since he was four months old unless he’s not feeling good.

Heather said he likes to be rocked in the rocking chair and sang to.

“If he doesn’t feel good and he’s crying, we walk laps around the house and look out the windows. He likes looking outside,” she said.

Heather said her little one is an animal in the bathtub.

“There’s more water that gets on me than gets on him by the time we’re all said and done,” Heather said.

Tom’s coworkers at the Montpelier Ohio Department of Transportation garage bought Tucker a pair of bib overalls when he was born.

Heather said Tucker wore them for Halloween, when he was costumed as a little moose.

Tucker was born the day after the birthday of Tucker’s great-grandmother, Louise Trowbridge. She died 18 days after he was born.

As new parents, Heather said she and Tom have learned “everything is on (Tucker’s) time. It’s pointless to have an agenda. We get things done; it’s just at different times.

Tom said all he and his wife do is work, adding, “We get less sleep now.”

“He’s our blessing from above,” Tom said.

“You make the world go around and make bad days better, don’t you, buddy?” Heather said to her son. First Baby of 2018

The title of the Archbold Buckeye First Baby of 2018 is waiting to be claimed.

The Buckeye First Baby of 2018 is the first baby of the year born to parents living in the Archbold or Pettisville school districts after 12 a.m., Monday, Jan. 1, 2018. The birth may occur at any hospital.

•And a year’s subscription to the Archbold Buckeye.­Y