Troopers Have Lead On Car In July 17 Rollover Crash 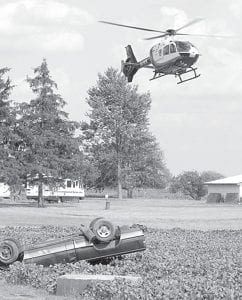 A helicopter ambulance lands near the scene of a crash that occurred near the intersection of US20A and Co. Rd. G at 4:40 pm, Tuesday, July 17. One woman was hospitalized.– photo by David Pugh

William Bowers, lieutenant of the Toledo post of the Ohio State Highway Patrol, said troopers have a lead in finding a car that was involved in a Tuesday, July 17 auto mishap that hospitalized a Montpelier woman.

Bowers said Monday, July 23, that troopers received an anonymous tip about the car, identified by witnesses as a newer red Dodge Stratus.

In a press release, OSHP officials said at 4:40 pm that day, the Dodge was traveling west on US20A, while Heather L. Hageman, 25, Montpelier, was driving a mini-pickup east on the highway, with passenger Sheila A. Hageman, 52, also of Montpelier.

At the intersection between US20A and Co. Rd. G, the highway curves to the northwest, while Co. Rd. G continues due west.

The pickup overturned into a soybean field, coming to rest on its top.

There was no contact between the pickup and the car, which continued westbound.

ALS-1, the Archboldbased paramedic unit, and Archbold Rescue responded. They called for a helicopter ambulance.

The helicopter landed near the crash scene, then transported Heather Hageman, who is seven months pregnant, to Toledo Hospital.

She was listed in good condition, Wednesday morning, July 18. She has since been released.

Sheila Hageman was transported by Archbold Rescue to the Fulton County Health Center, where she was treated and released.

OSHP troopers ask anyone who witnessed or has information about the crash to contact the patrol’s Toledo Post at 419-865-5544.