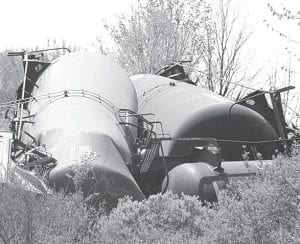 Tank cars, each loaded with 30,000 gallons of ethanol, lie stacked together after a derailment on the Norfolk Southern main east-west line, Monday, April 19, in Williams County, near the community of Melbern. Leaking ethanol formed a vapor cloud, which prompted emergency responders to call for the evacuation of area homes for a few hours. There were 89 cars in the eastbound train, 39 of which derailed. Seven tank cars leaked. An investigation into the mishap is ongoing.–photo by Jennifer J. Hellard, used with permission of the Bryan Times

Tim Jonovich, director of the Williams County Emergency Management Agency, said the biggest challenge presented by the derailment was seven damaged tank cars that were leaking ethanol into a ditch along the tracks.

The leaking tankers forced the evacuation of 25 to 30 homes for a few hours.

The derailment occurred about 9:22 am between Williams County roads 8 and 9, near the community of Melbern.

There were 18 tank cars, with seven leaking ethanol along the track.

About 80,000 gallons was lost, said Jonovich. There were no injuries.

Special chemical absorbing booms were deployed to catch and collect the alcohol. Later, special vacuum trucks removed what had been spilled.

The Williams County incident is the third derailment within a 30-mile area so far this year.

“There is no connection in the derailments,” Husband

If the 20th century has taught us anything, it is to be cautious about the word

I’ve learned from experience that the greater part of our happiness or misery depends on our dispositions and not on our circumstances.– Martha Washington

In ancient Egypt, where men shaved for cleanliness as early as 3000 B.C., both kings and queens sometimes wore a false beard as a symbol of royalty.