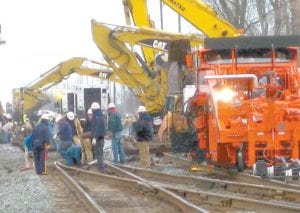 This photo was taken during the cleanup of a Nov. 23, 2010, Norfolk Southern train derailment in Wauseon. Like the Thursday night, June 6 incident in Swanton, the train was carrying cars loaded with shipping containers. Also like the Swanton incident, some of the derailed cars came to rest near homes.– photo by David Pugh

For Dave Davis, Archbold fire chief, a train crash in Archbold would be a “worstcase scenario,” depending on where it happened.

A statement from NS officials said the train struck an unoccupied passenger vehicle that was left on the tracks at the Swanton Main Street crossing.

Press reports say the crash knocked out power in the area.

Of the 14 railroad cars, 12 were carrying empty containers. Containers on two cars were loaded with consumer goods.

The wreckage piled up behind apartment buildings and homes.

There were no injuries, but reports say residents in the area were evacuated until it could be confirmed that none of the railroad cars in the crash contained hazardous materials.

Swanton police officials could not be reached for comment on Monday, June 10, to determine why a vehicle had been abandoned on the tracks.

Like commercial trucks, rail tank cars carrying chemicals are required to carry placards with numbers. The numbers identify the chemicals.

Fire and rescue personnel can use that number and determine cargo and the potential risk it poses.

Davis said with up to 100 trains a day passing through the village, “you tend to watch cars and see what’s coming through here. There’s some stuff that would get pretty nasty if a train were to ever derail.”

After a crash, Davis said, “you just start to look to see how close utilities are, how close the houses are, and businesses… it makes you more aware of what you need to take into consideration if something like that were to happen.”

The first consideration, Davis said, “would probably be scene safety for the personnel, because, number one, you’ve got to determine what the train was carrying, and number two, there’s some high-tension (electric power) lines that go right down the tracks that could potentially be taken down.

“That’s always on your mind first, is to keep your people safe.

“Once you do that, you just have to go through your steps and see what’s involved– see the scope of it, see if you’re going to have enough resources to take care of it, and what resources you have to call.

“Once you start getting the information you need, then you have to start thinking about evacuation, if necessary.

“There’s a lot of things you’ll have to take into consideration, and you’ll probably have a short time to do it in.”

Davis said there is the possibility that a rail disaster “could potentially take both stations out.”

NS and contractors were on scene to remove the wreckage and repair the tracks.

Within 24 hours, at least one of the two tracks was open; the second opened soon after.

While the tracks were blocked, NS dispatchers routed trains around the crash site in an attempt to minimize the impact on schedules.

Davis said rerouting trains “costs them a lot of money.”

“Norfolk Southern appreciates the assistance provided by local first responders, and apologizes to the community for any inconveniences caused by this incident,” NS said in its statement.

A similar derailment occurred about 8 1/2 years ago in Wauseon.

There were no injuries, but power in the area around the crash was knocked out, and some homes were evacuated until repairs were made.