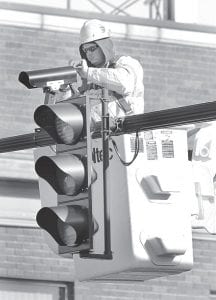 Howell said there have been no complaints about the new video detectors.

The cameras, working with a computer, detect a waiting vehicle and change the signal lights.

The video detection system replaces loop-style detectors, which were wire embedded in the pavement. Loop detectors would fail on occasion, and whenever the street was repaved, they would need to be replaced.

Council approved a contract with U.S. Utility, Perrysburg, for $32,670.40 to install the new cameras.