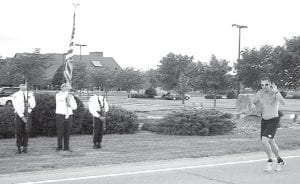 Greg Matusoff, from the New Orleans, La., Fire Department, runs past Sauder Village, Friday evening, Sept. 3. Matusoff, who was in New York City on Sept. 11, 2001, watched the tragedy unfold from his balcony. He was in New Orleans when Hurricane Katrina hit, after joining the New Orleans Fire Department. Matusoff was greeted by the Archbold American Legion color guard, composed of, from left, Don Ritta, Heath Nafziger (Sons of the American Legion) and Lenny Miller.– photo by David Pugh

The “Tour of Duty” 9-11 Remembrance run traveled past Sauder Village, Friday night, Sept. 3, more than 3,500 miles after it started.

The Tour of Duty is comprised of 16 Australian and 16 American firefighters, police, and paramedics who are running across America in remembrance of those who died in the Sept. 11, 2001 terrorist attacks.

“This run, for me, is pretty much an epic thing,” said Greg Matusoff, representing the New Orleans, La., Fire Department.

Matusoff was running when the entourage drove past Sauder Village.

The events of 9-11 are “probably one of the biggest things that’s happened in this country, tragically,” he said. “It’s super-important that people remember this, so for me, being asked to do this run was a huge honor.

The group started in Santa Monica, Calif., on Aug. 12, and finish on Sept. 11 in New York City with a parade across the Brooklyn Bridge.

They will run a total of approximately 4,620 miles.

At 8:46 am each day, the runners pause to hold a brief dedication ceremony. Each day, they read aloud eight names of emergency workers who were killed on Sept. 11, 2001.

Every mile is dedicated to one of the 2,976 civilians killed in the attacks on the World Trade Center, Pentagon, and on United Flight 93, which crashed in Pennsylvania.

The runners run 24 hours/ day in shifts. Each group runs a six-hour shift; then is off for 12 hours.

The Tour traveled to Fayette from Chicago on US 20, then turned south on SR 66 from Fayette and east on SH 2 at Archbold.

Several Tour vehicles stopped at the Wauseon Fire Station, Friday night, where a ladder truck with an American flag flying in the breeze was extended.

They continued the journey on State Route 2 to Toledo.

Several talked about how interesting it is to see the various landscapes of the United States, from the deserts of the western states to the rolling fields of the Midwest, from large cities to small towns.

All have enjoyed the journey, and have discovered the beauty that is America.– Mary Huber