with photos and video 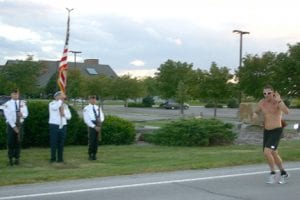 Greg Matusoff, from the New Orleans, La., Fire Department, runs past Sauder Village, Friday evening, Sept. 3. Matusoff, who was in New York on Sept. 11, 2001 and watched the tragedy unfold from his balcony, also watched the tragedy of Hurricane Katrina unfold after he joined the New Orleans Fire Department.–photos by David Pugh, video by Mary Huber

The "Tour of Duty" 9-11 Remembrance run traveled past Sauder Village, Friday night, Sept. 3, more than 3,500 miles after it started.

The Tour of Duty run is comprised of 16 Australian and 16 American firefighters and police who are running across America in remembrance of the first responders who died on 9-11.

They started in Santa Monica, Calif., on Aug. 12, and will finish on 9-11 in New York City with a parade across the Brooklyn Bridge. It is a total of approximately 4,620 miles.

At 8:46 am each day the runners pause to hold a brief dedication ceremony. Each day, two firefighters read out 8 names of emergency workers who were killed on Sept. 11, 2001. Every mile is dedicated to one of the 2,976 civilians killed in the attacks on the World Trade Center, Pentagon, and on United Flight 93 which crashed in Pennsylvania.

The runners run 24 hours/day in shifts.

The Tour traveled to Fayette from Chicago on US 20, then turned south on SR 66 from Fayette and east on SH 2 at Archbold. Several Tour vehicles stopped at the Wauseon Fire Station, where a ladder truck with an American flag flying in the breeze was extended. Participants ran on SH 2 to Toledo Friday night. 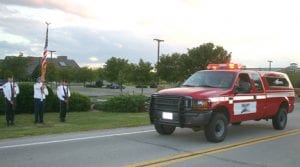