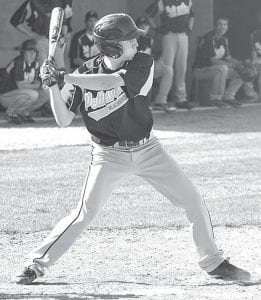 Jacob Roth walked, then stole second, and scored on a single in Pettisville’s non-league game with Edgerton, Friday, April 27.– photo by Mario Gomez

The Pettisville baseball team had a tough week on the diamond, suffering four straight losses.

In non-league action, Pettisville fell to Liberty Center and Edgerton.

Pettisville hosted the Eagles, Monday, April 23, and suffered an 18-1 defeat. Giving up 16 hits, the Birds had just three.

Logan Nofziger and Tate Kauffman each had a single; Kauffman had a run batted in.

The two squads were scoreless after the first inning.

Pettisville had its lone run in the bottom half of the second while the Eagles added three runs in the fourth and 10 in the fifth. LC 4, PHS 3

Holding a 3-1 lead going into the bottom of the sixth inning, the Blackbirds couldn’t hold on against the Tigers, Tuesday, April 24, at LC.

At the plate, Cam Norris went 2-3, including a double. Tanner Rufenacht had an RBI single. Hilltop 5, PHS 0

Norris suffered the loss on the mound. In five innings he gave up four runs (two earned) on four hits, struck out two, and walked seven. Edgerton 11, PHS 4

The Birds banged out 10 hits.