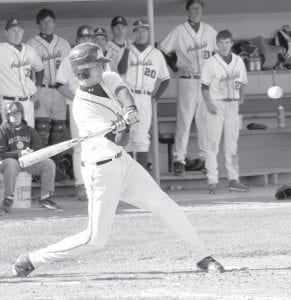 The Streaks dropped games to Tinora, Wauseon and Montpelier.

Archbold traveled to Tinora (19-3), Tuesday, May 1, and suffered a 7-3 setback in non-league action.

The Rams’ Tyler McKenney pitched a complete game, giving up six hits and striking out 10.

At the plate for Archbold, T. Wyse, Zach Zimmerman, and Evan Wyse all doubled. Michael Walker, Tyson Dietrich and Zach Driver each singled.

Archbold squandered a 5-0 first-inning lead, Thursday, May 3 and lost to NWOAL rival Wauseon 11-10.

Wauseon (14-4, 5-1 NWOAL) started its comeback in the top half of the third, scoring three runs. The Indians added three runs in each of the fifth and sixth innings, knotting the score at 9.

Archbold had scored a run in the fourth and three in the sixth.

Wauseon added one run in the seventh. Archbold matched it to tie the score at 10.

The Indians took the league win with a run in the ninth.

Tyson Schnitkey (1-4) suffered the loss. In three innings he gave up two runs on five hits, struck out two, and walked three.

Archbold led 2-0 after two and exploded for five runs in the fourth before adding two more in the sixth.

The Locos crossed the plate once in the fifth before the nine runs in the sixth.

T. Wyse (3-2) suffered the loss, giving up five runs on five hits and one walk.

Archbold ended the game with 11 hits to the Locos’ 14. Kolin Schilt, Driver and Walker each had two singles.

The winner advances to a district semifinal, Thursday, May 17, 4:15 p.m., at Defi- ance High School.

The district championship is scheduled for Saturday, May 19, 7 p.m., at DHS.