Top-Ranked Streaks Move To 19-0 With Wins Over Edgerton, Delta 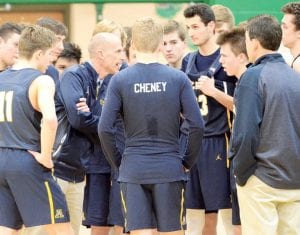 The Streaks traveled to Edgerton, Tuesday, Feb. 5, and caged the Bulldogs 50-29.

Archbold went back on the road, Friday, Feb. 8 and scored an easy 70-22 Northwest Ohio Athletic League win over Delta.

Archbold leads the NWOAL at 5-0 after Evergreen lost to Wauseon 66-43 to fall to 4-1, tied with the Indians in second place.

The Blue Streaks welcome Evergreen to the Thunderdome, Friday, Feb. 15, looking to win at least a share of their 28th NWOAL title in school history.

Archbold normally plays the Bulldogs in an early-season contest, but Edgerton’s football playoff run moved the game to late in the season.

Edgerton (9-7) held the ball for a good chunk of the game but had trouble scoring. 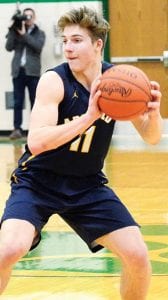 Meanwhile, the Streaks increased their lead to 41-22 after three.

The fourth period was relatively even, with AHS securing the 50-29 non-league win.

Jeron Williams led all scorers with 16 points, including four of the team’s eight three-pointers.

Archbold came out sluggish but got the ship righted and never let up the rest of the game.

Wiemken was the go-to player in the first quarter, scoring 12 of Archbold’s 19 points for a 19-5 lead.

Archbold went on a 9-2 run in the first four minutes of the second to lead 28-7.

Delta managed just one more field goal while the Streaks scored 12 more points to take a 40-9 lead into the locker room.

“We didn’t really have the mental focus and sharpness that we’ve been used to most of the year at the start,” said Joe Frank, AHS head coach. 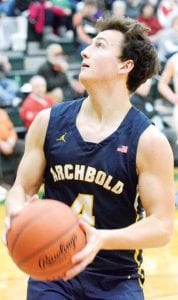 “We decided to pick up fullcourt (pressure) a little bit, and we got them to turn the ball over and we got some layups.

“We bounced back, and it turned out to be a decent night overall.”

The starters scored the first 11 points of the third, but it was the final two points that helped the Streaks send the final message.

Elijah Zimmerman stole the ball at half court and drove to the basket, only to toss up a beautiful pass that found the hands of Ramos, who delivered the alley oop slam dunk for a 53-9 lead.

From that point the starters became observers as the reserve players finished the game.

“In games like this, it doesn’t do any good to keep the starters out there and maybe pick up things habitwise that we don’t want to see,” said Frank.

“The other guys coming off the bench work just as hard each week in practice, so we want to give them time, too.

“We’ll need better focus in our games next weekend to play at the level that we need to play at to be successful.

Thirteen Blue Streaks got in the scorebook, led by Wiemken’s 22 points.