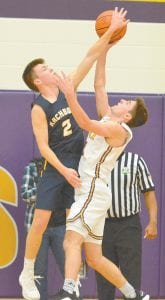 Left: AJ Mahnke stretches to block the shot of Bryan’s Connor Shirkey. Right: With Archbold’s Jeron Williams hovering over him,

The Streaks survived a staunch test against Napoleon in the Thunderdome, Monday, Jan. 21, 66-61.

The Golden Bears (8-7, 1-2 NWOAL) posed a formidable challenge to the Streaks.

Bryan used the momentum and energy of its fan base to keep the first quarter competitive, leading 10-6 midway through the quarter.

Elijah Zimmerman and Austin Wiemken combined to score all of Archbold’s firstquarter points and helped the Streaks battle back to tie the game at 14.

AHS took the lead on a Wiemken three-pointer as the quarter ended for a 17-14 Blue Streak lead. 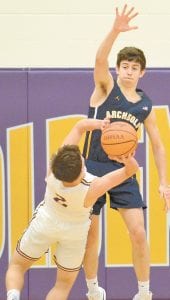 “You’ve got to give Bryan credit. They’ve been playing very well.”

The Bears managed just two points in the second while Archbold point guard Jeron Williams dropped eight of Archbold’s 12 points for a 29-16 lead at the half.

Archbold piled it on in the third, opening its biggest lead at the five-minute mark, 37- 22, and finishing the quarter up 42-28.

Rigo Ramos caught fire in the fourth, scoring eight of Archbold’s 17 points in the period to help finish off the Golden Bears 59-38.

“I’ll be honest, I thought this game was going to go down to the fourth quarter,” said Frank. “I certainly didn’t see it playing out like it did, but I think our defense had a lot to say about that.

“It seemed like we were our own worst enemy at times on the offensive end, but we’ve got players that are pretty basketball savvy.

“We didn’t have to do a lot of adjusting; it was just a matter of them making good decisions.”

A trio of Blue Streaks finished in double figures.

Wiemken led all scorers with 20 points. Williams had 16, and Zimmerman added 12.

The Streaks withstood a tough challenge from the Wildcats and held on to get the non-conference win in a game that postponed from Saturday, Jan. 19, due to inclement weather.

Archbold was up by 18 points, 48-30, with two minutes left in the third when Napoleon started to rally. Landon Willeman scored eight points in 30 seconds, cutting the difference to 48- 38 going into the final eight minutes.

The Streaks outscored the Cats 10-7 in the final two minutes to preserve the win.

Wiemken and Zimmerman led the Streaks with 17 points each, followed by Williams with 16.

Archbold made quick work of the Pirates in this nonleague contest.

The Blue Streak reserve players were once again the benefactors of some much-deserved playing time and outscored the Pirates 16-10 in the fourth for the 86-31 final.

Thirteen players got into the scorebook for Archbold, with the Streaks hitting 10 three-pointers.

Mitch Coleman and Gavin Huff each scored 10 for the Pirates.