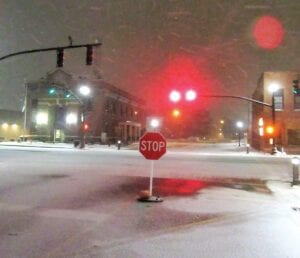 Lights in downtown Archbold were glowing again after power was restored about 10:45 pm, Sunday night, Feb. 21. Traffic signals no longer function when power goes out, and Archbold Street Department crews place stop signs at some intersections. This photo, taken soon after power was restored, shows the stop sign at West Holland Street and North Defiance Street.– photo by David Pugh

Toledo Edison is still searching for the exact cause of a power outage that struck Archbold, Pettisville, and western Fulton County, Sunday night, Feb. 21.

Power went out about 9:45 pm to all parts of town. It blinked back on for a brief instant, then went out a second time and stayed out.

Power on the south side of the Norfolk Southern railroad tracks in Archbold was restored within about 15 minutes, but the north side was out of power for about an hour.

Christopher Eck, senior communications representative for First Energy, parent company of Toledo Edison, said something caused a 69,000-volt (69 kv) transmission line to trip, or disconnect from the rest of the grid as a safety measure.

“Could have been animal contact, or tree contact, but no immediate fault was obvious when the line was inspected, so they’re still investigating,” Eck said in an email.

“The customers who lost service were all served by substations that were affected by the high-voltage transmission outage.

“Some were able to be switched over to to a different line very quickly, keeping their outage at about 20 minutes.

“It took about 90 minutes to restore the remaining substation (and remaining customers) to service.”

Eck declined to give more details.

“With increased focus on (power) grid security, it’s probably best not to discuss details about the transmission system or specific substations, i.e., which substations serve which areas,” he said.

Soon after the outage, police officers were out directing traffic at intersections.

Temporary stop signs were posted at certain intersections as well.

Some drivers who were driving during the outage simply drove through intersections where traffic signals were not working.

Tera Rogers, police administrative sergeant, said when a motorist approaches an intersection where there are traffic signals but the signals aren’t working, they should treat the intersection as a four-way stop.

Each driver, approaching the intersection from any direction must stop, then proceed with caution.