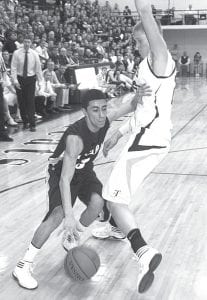 Gabe Rodriguez prevents Ottawa-Glandorf’s Michael Rosebrock from getting too close in the first half of the Division III district final, Saturday, March 10.– photo by Scott Schultz

The Streaks close the season with a 17-6 record. The Titans (17-6) advance to the Wednesday, March 14 regional semifinal against New London.

OG, under Tyson Mc- Glaughlin, head coach, advanced to the district title game with a 38-35 win over the Patrick Henry Patriots.

“I am honored and humbled to be here, and I am glad these guys get the opportunity to move on,” said McGlaughlin.

“I thought our kids played hard defensively and battled OG hard,” said Doug Krauss, AHS head coach. “Our kids have come a long way this year at both ends of the court.

“We have struggled offensively all year long. We are not an offensive juggernaut, but this team gave us everything all year and I appreciate their efforts.

“We had a bunch of kids come together this year and give it their best; they have upheld the tradition of Archbold basketball.

“Losing to an OG team is not a crime. They are a bigtime program in Northwest Ohio and I have a lot of respect for them.”

Krauss said after his team’s win in the semifi- nal game over Tinora that, “There isn’t anything better than playing on a Saturday night in the Grand Canyon.”

One can’t argue with comments like that about a facility that is one of the finest in Northwest Ohio for watching tournament basketball.

Off the opening tip, Archbold’s Luke Kammeyer gave Archbold the lead and the Archbold side erupted.

Metzger led all scorers with 12 points, while Kammeyer paced Archbold with 10.

The Titans closed out the first quarter holding a 10-6 lead, setting up a defensive contest for the next 24 minutes.

The defensive play of both sides maintained throughout the second quarter, with OG holding Archbold to just one field goal– a Tyson Dietrich drive along the baseline.

Hayden Stamm added a pair from the foul line for Archbold’s total of 10 points going into the half.

The Titans chipped in seven in the second for a 17-10 halftime lead.

OG started the second-half scoring with Rosebrock hitting one at the foul line.

Kammeyer answered with one from the charity stripe.

Noah Bramlage hit a 10- footer for the Titans. Rodriguez quieted the Titans with a short jumper.

OG opened its largest lead after Caleb Siefker drove the lane for two and Rosebrock got a tip-in for a 24-13 advantage.

The Streaks came right back with Kammeyer hitting a pair at the foul line. The AHS senior then came up with a block and Stamm hit a jumper to close the gap to 24-17.

OG pushed the lead back to 10, 27-17, to start the fi- nal eight minutes with Alex Westrick hitting a foul shot and Logan Koch scoring on a putback at the buzzer.

Archbold scored first to start the final period with Kammeyer scoring a putback, followed by one at the foul line.

Evan Wyse hit a jumper and the Streaks closed the gap to 27-22.

Dietrich answered, closing the Titans’ lead back to five.

OG hit one at the foul line and Koch drove the baseline for two.

The Titans struggled at the foul line the entire game, hitting just 8 of 18. The Streaks had their own problems, connecting on 6 of 14 foul shots.

It was Archbold’s last bucket.

Metzger hit two at the foul line, and Siekfer added one.

Trailing 35-26, Archbold went to inbound the ball. Metzger stole the inbounds pass and went the length of the court for two.

Koch closed out the Titans’ scoring with a foul shot for the 38-26 final.