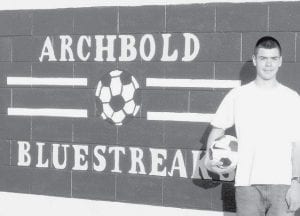 Chandler Tinsman stands in front of the kicking wall he built for the soccer program of the Archbold Parks and Recreation Department. The wall gives youngsters something to kick a ball against for practice. It replaces an old wall made of plywood, and an old soccer goal. Tinsman, 15, took on the project for a community service project for an Eagle Scout rank. – courtesy photo

He discovered the Archbold Park Board soccer program needed a kicking wall, which is used by soccer players to develop skills.

After some research, Tinsman decided, “This was something we didn’t have, and it isn’t going to happen unless I do it.”

Tinsman started designing the wall on a computer in early August.

He had a couple of people at Lugbill Supply Center and Bob Seaman, village engineer, look at the design.

“They gave me some ideas,” he said.

He debated between wood or concrete block, and decided on block.

He got approval from the park board and the Boy Scout organization. The park board promised $500 toward the project.

They also suggested changes in the artwork on the wall.

Tinsman decided on putting “Archbold Blue Streaks” on one side, and a big “A” on the other. 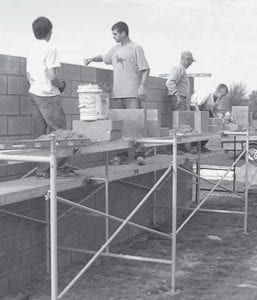 Chandler Tinsman, and others, at work on the soccer wall. The wall is located in Woodland Park, where the village soccer program is concentrated. Tinsman said he received donations of cash and materials to construct the wall. While the Archbold Park Board pledged up to $500 to the project, Tinsman was able to finish the project without using any Park Board money. – courtesy photo

To fund the project, he and his family sold soft drinks at the Archbold Chili Cook-Off and received other donations. He sold soccer T-shirts for $12, and received over $1,000 in donations from letters he mailed to citizens.

The Archbold Area Foundation agreed to provide up to $750, and the Archbold High School Art Club donated the artwork.

Other donations from companies included the block, reinforcing bar, and use of equipment; another provided concrete at a discount.

A mason and assistant, along with volunteers, built the wall.

The wall was finished Thursday, Nov. 6, when Tinsman kicked the first “official” ball at the wall.

The finished project is 24 feet long, eight feet tall, and one foot thick. It’s located in Woodland Park, east of the Kiddie Korral.

The whole time he was working on the project, “I was trying to do it as perfect as I could,” he said, so he could set an example for other Eagle projects.

To earn the Eagle Scout rank, Tinsman must pass a board of review.

The ironic part of the story is that Tinsman isn’t even in the Archbold soccer program.

“My brother (Bryce, 14) and a lot of his friends are in the soccer program,” he said.

“I thought I would help out.”