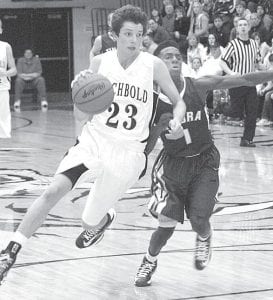 Archbold’s Tyson Schnitkey (23) drives past Tinora’s Robert Wuo in the third period of the Div. III district semifinal at Napoleon. The Rams won the game in the second period, when they outscored AHS 13-7. Both teams scored 32 points in the second half.– photo by Scott Schultz

The Archbold boys basketball team made the short trip to Napoleon, Thursday, March 7, to face Tinora in a Division III district semifi- nal.

The Streaks, looking to advance to the title game to face Ottawa-Glandorf, had to do it without seniors Tyson Dietrich and Jay Miller. Dietrich has been ill, while Miller had a stress fracture.

After a back-and-forth first half, the Rams came out in the second half and held off the Streaks to claim a 55-50 win.

The Blue and Gold held a slim 11-10 lead after the first eight minutes.

The Rams rattled off the first five points of the second quarter and outscored the Streaks 13-7 to take a 23- 18 advantage into the locker room.

Doug Krauss, Archbold head coach, called a time-out just one minute into the second half to settle his squad.

Taylor Price hit a deuce for AHS. Drewes answered with a conventional three, pushing the difference to 32-20.

Archbold and Tinora went back and forth in the third stanza with the Rams leading 43-34 heading into the final eight minutes.

Archbold struck first to start the fourth on an Evan Wyse foul shot, but the Rams answered for every AHS basket.

Archbold cut the lead to 51-48 with just under one minute left on a 12-footer by Frank and a free throw by Bryce Tinsman.

But it wasn’t enough as the Rams connected on 4-8 from the foul line in the closing seconds to seal the win.

Archbold won the rebounding battle 32-29, and committed 15 turnovers to Tinora’s 13.

“We got it down to five at the half, but Tinora hit two big buckets to start the second half, and that kind of kept a cushion,” said Krauss.

“We got it down at the end and had a chance at the end. You fight and fight and sometimes you can’t get over the hump.”

“It’s been a fun group,” said Krauss. “We would like to play one more game, but sometimes you have to take the good and the bad.

“Tonight it didn’t go our way, and we say goodbye to eight great seniors.”