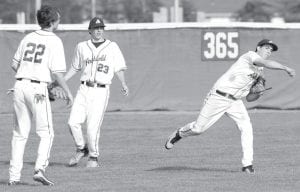 Tinora’s Tyler McKenney blooped a single in the bottom of the seventh inning to drive in the game-winning run when the Rams hosted Archbold, Tuesday, May 4.

Trailing 7-3 in the top of the sixth, the Streaks rallied for four runs to tie the score before McKenney sealed the Ram win with a single.

Tyler Dietrich recorded the loss on the mound, giving up one run on two hits in two innings while striking out one and walking two.

Brett Wonders picked up the win. In two innings he gave up one run on two hits, struck out three and walked one.

Sam Miller led Archbold at the plate, going 3-4 with three runs batted in. Tanner Wyse and Ben Miller each went 2-4 with T. Wyse picking up an RBI and Miller, a double.

Tinora is the number one seed in the Division III sectional at Archbold. The Streaks are the number two seed.

Tonight’s winners advance to the district semifi- nals, Thursday, May 20, at Defiance High School. The Tinora-Delta winner plays at 4:15 p.m. and the AHSPaulding winner plays at 6:30 p.m.

The Archbold-Swanton game originally scheduled for Friday, May 7, at Fifth Third Field in Toledo has been rescheduled for Saturday, May 22, 12:30 p.m.