Tigers No Match For Archbold In Sectional Final 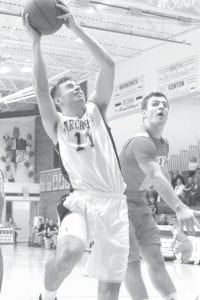 Blue Streak senior Micah McQuillin (11) penetrates the paint for a basket with 44 seconds left in the first half of Archbold’s sectional final with Liberty Center. The bucket gave Archbold a 25-13 halftime lead. Trying to stop McQuillin is LC’s Logan Burdue.– photo by Mary Huber

The Tigers didn’t add a point until Leighton Chambers hit one of two foul shots with 3:27 left in the half. By then the Streaks had a 21-5 advantage, which was extended to 23-5 when Luke Kammeyer hit a basket and was fouled.

Liberty Center closed the difference to 25-13 going into the locker room.

Archbold outscored the Tigers 18-8 in the third period and 16-8 in the fourth for the 30-point margin of victory.

Kammeyer was the only scorer in double figures. He scored 12 points. Twelve Blue Streaks scored.

The Vikings handed the Streaks their only loss in the Northwest Ohio Athletic League this season. Evergreen won a 76-64 battle with AHS, Thursday, Dec. 17.