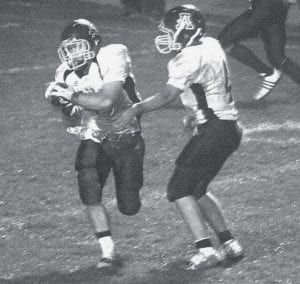 Jake Fidler takes the handoff from quarterback David Rupp in the first half of the Streaks’ NWOAL contest against Liberty Center. Fidler was held to 41 yards rushing on the night, but led AHS with 92 yards receiving. The two squads meet again Saturday night at Tiger Stadium for the first round of the Div. V playoffs.- photo by Scott Schultz

Game 10: one team is guaranteed a playoff spot; one team needs a win to make the playoffs.

The Archbold Blue Streaks, under John Downey, head coach, made the trek to Liberty Center, Friday, Oct. 24, with a spot in week 11 locked up. AHS was looking to keep the Tigers out of the post-season and wanted to finish the regular season on a winning note.

AHS also wanted a victory on a field where it hadn’t won since 1989.

The Tigers, guided by Rex Lingruen, longtime mentor, needed a win to have a chance to play one more week.

After Archbold held a 14- 0 lead at the half, the Tigers scored 21 unanswered secondhalf points to win 21-14.

“We are on our home field and we wanted to protect that,” said Lingruen.

“We knew we had to win if we wanted to get in the playoffs, and in the back of (Archbold’s) heads, no matter what you say, they knew they were in, so sometimes it just comes out like that. 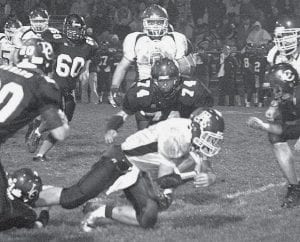 “Both teams just played hard. Our seniors came through and played together as a team.

“It’s a two-half ball game. Archbold won the first half and we came out in the second half and things went our way.”

“This was my fault. I was a dumbbell,” said Downey. “My players deserve better than that.

“You would think after 30 years of coaching I would know better. That was all on me. My players gave tremendous effort. I am so disappointed in my performance; I can’t describe it.”

First Half: Spread Them Out

The game plan in the first half was obvious: the Streaks spread the field, stretching the LC defense as far as it could go.

The results: the Blue and Gold put two scores up in the first half while its defense shut down the power running game of the Tigers.

The Streaks had opportunities to put the Tigers in a hole in the first half, but a bad snap that resulted in a turnover and an interception by Rupp deep in Tiger territory halted scoring drives.

Archbold opened the second half with a different game plan, going from the spread offense to the traditional ground game in hopes of eating up the clock and protecting its 14-point lead.

LC’s defense stiffened and the Streaks struggled. The Tiger defense came up with a stop on a fourth-and-one play, leading to its first score of the night.

“I figured (Archbold) would come out in the second half and want to run the clock down,” said Lingruen. “They controlled us defensively, so they had nothing to worry there; they just wanted to run some clock.

“We were fortunate they drove it down and we had some nice stops. The momentum changed at that point. High school football is about momentum, and from that point on I felt we controlled the game and the momentum went our way.”

Tiger Andy Spiess rambled for 56 yards, and Patrick Brown capped off the drive with a 3- yard touchdown run with 5:35 left in the third.

Facing fourth-and-long, the Streaks found themselves deep in their own territory when the Liberty defense charged through the line, forcing punter Jake Fidler to run, falling short of the first down.

The Tigers came up short on their next two possessions, despite driving down to the Streaks’ 1-yard line, where the Blue and Gold defense, like it had all night long, came up with a big stop.

Facing 99 yards for a score, AHS faced a fourth-and-one on its own 10-yard line. LC’s defense stuffed Fidler, giving the Tigers excellent field position. Three plays later, Brown hit Jordan Seedorf for a 4-yard touchdown toss, tying the score at 14 at the 4:40 mark.

“I might have done the same thing (go for the first down),” said Lingruen. “I have been there before. They get the first down and that could be the game. That was definitely a big break for us.

“I know John, in hindsight, wishes he hadn’t done that. But if he gets a first down it’s a tremendous play.

With the LC defense clicking on all cylinders, AHS was forced to punt again, giving the Tigers the ball on their 40-yard line.

Spiess crossed the goal line with 45 ticks left on the clock for the game-winning touchdown.

“There was a few mistakes on both sides, and we were able to take advantage of them,” said Lingruen.

“This was a game where I thought both teams left it on the field. A typical Liberty Center Archbold football game.”

Archbold heads right back to Tiger Stadium to face Liberty Center in the first round of the Division V playoffs at 7 p.m., Saturday, Nov. 1.

Other Saturday, Nov. 1 Region 18 regional quarterfinal contests and their finishes in the computer rankings: