Ties And Bonuses At Bible Quiz 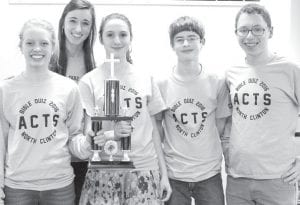 Ties and team bonuses were the order of the day at the Bible Quiz meet, Sunday, Feb. 7, at Central Mennonite Church.

“Hearts of Faith,” one of three teams from North Clinton, has so far this season tied both the two other teams, “Charged” and “Fierce Wolves.”

Also, the two House Church teams, “Right” and “Royal,” tied in their match on Sunday.

The match between “Sojourners,” from the Outback, and “The Other Mob’s,” Pettisville Missionary, also ended in a tied score.

Candy prizes were given to teams with the most team bonuses. A 20-point team bonus is awarded when four teammates answer correctly in a match.

Recognized were “Charged” and “The Mob,” Pettisville Missionary, with 10 and 8, respectively, in their 14 matches.

With over 50 unique names such as “Dionysius the Areopagite,” and about 20 unfamiliar towns or regions like Amphipolis and Apollonia, Acts 17 through 20 provided a fun challenge as Bible quizzers studied the travels of Paul and the people he encountered.