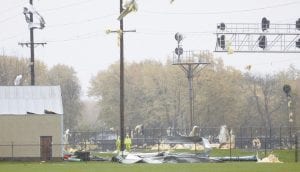 A severe thunderstorm passed through the area, Sunday, Nov. 5, damaging the ConAgra facility in Archbold. The photos, taken from Co. Rd. 24 looking east, show some of the damage. Top: Sheets of metal from the building became tangled in the Toledo Edison 69,000-volt transmission line, knocking it out of service. Below: Damage is evident along the roofline above the truck docks.– photos by Mary Huber

A severe thunderstorm caused damage to the Archbold ConAgra plant shortly after noon on Sunday, Nov. 5.

Dan Hare, ConAgra company spokesman, said a team of ConAgra company experts is working with officials from the Archbold facility to “ensure that we go through the assessment of damage, and help get the facility up and running again.”

No one was injured when the storm struck, but insulation from the building was spread far and wide.

Tufts of insulation were spread roughly south and east of the plant, littering both sides of South Defiance Street.

There is one report of some insulation being carried a mile away from the ConAgra facility.

Soon after the storm, pieces of metal from the building were found tangled in power lines, particularly the 69,000-volt Toledo Edison transmission line located along the Norfolk Southern railroad right-of-way.

Chris Eck, TE spokesman, said those pieces of metal knocked out the transmission line for about two hours. TE crews were on the scene relatively quickly to restore the line. 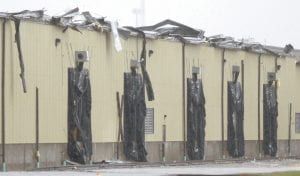 When they arrived, Davis said there was an odor of natural gas coming from the building.

ConAgra workers shut off the gas, then Ohio Gas Company crews arrived on the scene to make sure the gas was off. Davis said electricity to the plant was also shut down.

There was other damage from the storm in the area, but the damage to the ConAgra facility was the worst.

Initial reports from the National Weather Service office in northern Indiana said there were no indications the damage was caused by a tornado.

Amos Dodson, a meteorologist with the National Weather Service, said Monday, “We haven’t seen anything to suggest there was a tornado.

Top: An overview of damage to the ConAgra plant, caused by thunderstorms that passed through the area, Sunday, Nov. 5. Production at the plant was shut down Monday, Nov. 6. Below left: A backstop at the softball field at Pettisville was knocked down by the storm.

Fisher said as the storms moved out of Williams County, sporadic reports of damage started coming in.

There were reports of tornados in Blackford and Jay counties in Indiana, and Mercer County in Ohio.

Dodson said survey crews were out inspecting the damage.

Most of the damage in Fulton County was reported in the Archbold and Wauseon areas.

The press box at the stadium has a permanent canopy on top for photographers. That, he said, was ripped off.

Right: A building at the Miller Bros. Construction complex on St. Rt. 66 in Henry County found its roof taken off by the storm. Reports say damage in Fulton County was limited to the Archbold and Wauseon areas.– photos by Mary Huber and David Pugh

One child was injured in Wauseon when she picked up a live power line.

She and her family got home after the storm. When they got out of the vehicle, Sluder said the girl went around to the back yard, where she found the downed wire.

Sluder said she was conscious and talking in the ambulance. No further information on her condition is available.

Most of the roof was ripped off of a building at the Miller Brothers construction complex on St. Rt. 66, south of Co. Rd. A.

The softball backstop poles at the Pettisville school sports complex were also blown over, and were bent at their bases.

Donna Dettling, Archbold village administrator, said ARS, Archbold Refuse Service, will take the insulation with the regular trash pickup on Thursday and Friday. It must be bagged like other trash. 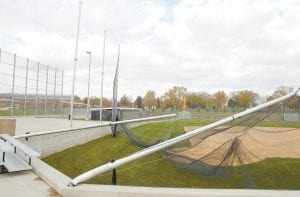 Dettling said the fiberglass insulation can irritate the skin. She recommended wearing gloves when picking it up.

“We encourage anyone involved with cleaning up to do so with care and safety in mind,” Hare said.–David Pugh