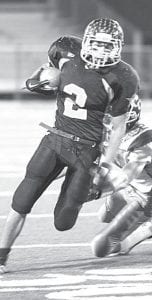 Noah Keefer shakes off an LCC tackler after catching a pass. He caught four passes for 37 yards in the contest.– photo by Mary Huber

Archbold’s season came to a close when the Streaks traveled to Findlay Donnell Stadium, Saturday, Nov. 13, to square off against Lima Central Catholic in a Division V regional semifinal football game.

Archbold miscues and an overpowering running game by the Thunderbirds handed the Streaks a 35-14 loss.

The Streaks finished with an 11-1 record.

“Our guys have had a tremendous season and have nothing to hang their heads about,” said Bryan Miller, AHS head coach.

“It is going to take a while for them to appreciate it. They have left an incredible mark on our program.”

“We felt that if we kept Archbold in front of us and not give them the big plays, we could get a stop,” said Jerry Cooper, LCC head coach. 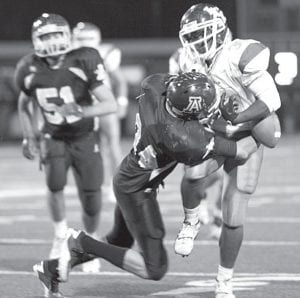 Archbold’s Chandler Tuckerman (84) strips the ball out of Jon Washington’s hands in the third quarter.– photo by Mary Huber

“I thought our kids did a pretty good job of keeping them in front of us.”

LCC took the opening kickoff, but Archbold’s defense, which had been a bend-butdon’t break squad all season long, shut down the T-Birds.

After rattling off 11 plays on its opening drive, LCC stalled at the Archbold 32- yard line.

The Streaks went right to the air, with Garrett Morton connecting with TJ Gerken for 12 yards on two passes.

Following an incomplete pass, Morton connected with Anthony Reyes for 9 yards followed by a 3-yard loss.

Facing fourth-and-four, the Streaks lined up for a Tanner Wyse punt, but a miscue resulted in the TBirds recovering the ball on the Blue and Gold 37-yard line.

The LCC ground game took over. Jon Washington picked up 4 yards on two carries, and Michael Rogers added 5 down to the Streaks’ 21-yard line.

Taylor Royster, a 225- pound running back, added 10 yards down to the Archbold 11-yard line. 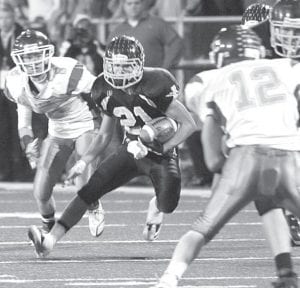 TJ Gerken (21) tucks the ball and races for yardage. The junior led the Blue Streak receivers with 93 yards on 10 receptions and one touchdown.– photo by Mary Huber

Bubba Krieg was next with a 9-yard carry to the Streaks’ 2-yard line. Royster capped off the drive with a 2-yard run into the end zone at the 1:24 mark of the first quarter.

Following a Corey O’Dowd kickoff, AHS started on its own 35-yard line. Morton picked up 3 yards on the ground; then Morton and Desmond Sleigh connected for 15 yards through the air for an Archbold first down.

TJ Gerken picked up 8 yards on the ground as the first quarter came to a close.

Morton hit Sleigh again on the first play of the second quarter for 6 yards.

An incomplete pass had the Streaks facing fourthand two on LCC’s 35-yard line. Morton lined up in the shotgun, but the snap went sailing over the senior’s head and the Blue and Gold was dropped for a 22-yard loss.

Picking up 34 yards on the ground, Tyler O’Conner, the T-Birds’ signal caller, dropped back to pass and fired into the end zone. The pass ricocheted off an LCC receiver right into the arms of Krieg for a 14-0 lead.

LCC crossed the goal line one more time in the half after Rogers intercepted a Morton pass in the end zone to halt an AHS scoring drive.

Following the intercep- tion, LCC picked up 19 yards on the ground on three straight plays. A pair of incomplete passes and a 3- yard pick-up left the T-Birds facing fourth-and-seven on their own 42-yard line.

Lining up to punt, Rogers took the snap and scampered 11 yards for a first down. Six plays later, Washington crossed the goal line for a commanding 21-0 lead.

The two squads exchanged turnovers to start the second half.

Archbold put six points on the scoreboard on a 19- yard TD toss from Morton to Gerken with 6:21 left in the third period. The pointafter touchdown attempt by Aaron Bontrager was blocked, leaving the Streaks facing a 21-6 deficit.

LCC added a pair of scores in the third quarter: a 2- yard run by O’Conner and a 3-yard run by Royster.

Archbold’s Tyson Dietrich scored on a three-yard run with 5:19 left in the fourth quarter for the game’s final score. Morton converted a two-point conversion pass to Gerken for the 35-14 final.

The Thunderbirds finished with 338 yards on the ground. Washington led the way with 103 yards.

“They are a big, physical team,” said Miller. “That has been the case for us most of the year– we have been outsized. We have had a bendbut don’t-break attitude on defense. We just put ourselves in bad situations.”

“We thought we could run the ball on Archbold,” said Cooper, “and give credit to our defense. We had three interceptions. Those were big.

“The combination of our defense making stops and our ability to run the ball was the difference in the game.”

Morton, who finished the game with 215 yards on 21 completions, had three interceptions.

“We had a litter of mistakes, which is very uncharacteristic of us,” said Miller.

“For as many mistakes as we made to even be within three touchdowns at the end, I still think we did a lot of things defensively that put Lima in bad spots, but anytime you come out and make that many mistakes, that’s me, that’s coaching.”

Hillsdale scored a touchdown with 9.2 seconds left to defeat Patrick Henry 48-41 in their regional semifinal on Saturday.

It was a fitting finish for the exciting game, after the Patriots came back from a 41-20 deficit at the beginning of the fourth quarter to tie the score at 41 with 1:39 left.