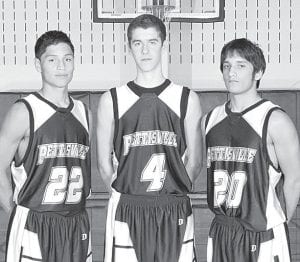 David Reyes, who averaged 13 points per game last season, Tanner Rufenacht, and Jacob Valdez return for Nofziger, who has spent the last 12 seasons at the helm of the Blackbirds.

The Birds finished last season with a 15-7 record and captured the Buckeye Border Conference title with a perfect 10-0 mark.

They made a run in the Division IV tournament before bowing out in the district semifinal.

“Due to the graduation of Zach Pursel and Aaron Bruner as three-year starters in the post, overall team size and experience in the post will need to be replaced,” said Nofziger.

The Blackbirds lack varsity experience but will rely on quickness and speed on the offensive and defensive ends of the floor and controlling the tempo on both sides of the ball.

Nofziger, who has compiled a 173-90 record, thinks the BBC will again be a tight race, and anyone could win the league title.

The only difference be-tween a rut and a grave is their dimensions.– Ellen Glasgow