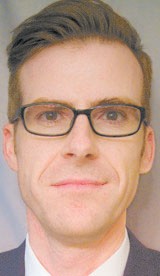 Three names will appear on the 2016 primary election ballots for the post of Henry County prosecuting attorney.

Republican voters will decide on Tuesday, March 15, whether Hawken Flanagan or Thomas Manahan, both of Napoleon, will be their candidate in the fall general election.

Gwen Howe-Gebers, Holgate, is seeking the Democratic nomination in the primary. She is unopposed.

Flanagan was appointed to fill the remainder of the term of Jay Hanna, who retired from the post after 39 years in office.

If there are no independent or write-in candidates, Howe-Gebers will face the winner of the Flanagan-Manahan race in November.

Flanagan was the only candidate to return a questionnaire to this newspaper.

He graduated from Hamilton (Mont.) High School in 1996.

He earned a Bachelor of Science degree in secondary education at the University of Portland (Ore.) in 2001.

He received a juris doctorate degree from The Ohio State University in 2007.

He is also a trustee of the Center for Child & Family Advocacy and Henry County Community Foundation.

Flanagan said if he is elected, he will “continue to operate the office with integrity and transparency.

“Additional resources will be utilized to resolve problems created by delinquent and nuisance properties.”