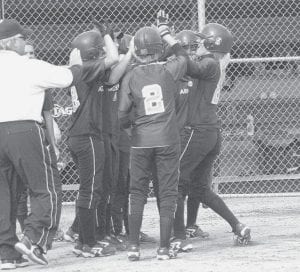 Above, teammates and coaches greet Dani Newman at home plate after the Blue Streak senior hit a three-run blast over the left field fence in the fifth inning against Wauseon. At right, Newman smiles as she rounds third base and heads for home. Archbold won a share of the NWOAL title with an 8-5 victory over the Indians; the Streaks share the title with Evergreen.- photos by Scott Schultz

The Archbold softball team had a busy week. The Streaks won five games, which helped them grab a piece of the Northwest Ohio Athletic League title and a sectional crown.

The Streaks claimed a share of the NWOAL title, their third straight, with a hard-fought 8-5 win over the Indians, Monday, May 12.

Archbold scored first, collecting two runs in the first inning. A one-out single by Lauren Kern started the rally. She advanced to second on a ground-out. Stacy Wyse walked and stole second to set up Alyssa Schaub’s tworun single.

The score remained 2-0 until the third inning when the Streaks scored two more. Andrea Allan singled and advanced to second on a bunt single by Kern. Unfortunately, Kern was injured on the play and had to leave the game.

A sacrifice bunt by Adi Lange moved the runners to second and third to set up a Stacy Wyse two-run double, upping the score to 4-0.

Lex Campos replaced Kern on the mound. The Indians scored a single run in the fifth; the Streaks countered with four, highlighted by Dani Newman’s three-run blast over the left field fence.

The Indians rallied for four runs in the seventh, keyed by Megan Dennis’ grand slam, but the Streaks held on.

The victory gave AHS a piece of the NWOAL title with Evergreen.

“I couldn’t be happier for this group of young ladies,” said Joe Frank, AHS coach. “We certainly had to overcome some adversity in losing Lauren, but the rest of the team stepped it up when the game was on the line.

“Lauren was pitching one of her better games before the injury, but Lex Campos came in and did a great job. There was a league title on the line and she performed well under those circumstances.

“Our offense certainly carried its share of the load today with 11 big hits. Dani Newman’s three-run homer really put an exclamation point on the win today.”

The Streaks broke open a 1-1 deadlock with a four-run sixth inning and went on to a 5-3 win, Thursday, May 15.

Lange led off the sixth with a triple and scored on a single by Schaub. A Morgan Ducey double and Newman single also drove in runs.

The Panthers were not about to go away quietly as they scored two runs on a bases-loaded single. On the single to left, the Delta runner on first base, trying to advance to third, was thrown out by Newman, and that’s how the game ended.

Campos pitched the complete game victory, giving up three runs on eight hits while striking out seven and walking four.

Allan led AHS at the plate, going 2/3, while Lange tripled and Ducey doubled.

The win set up a Tuesday, May 20 showdown between NWOAL co-champions Evergreen and Archbold in the district semifinals.

“We feel very fortunate to defeat a good Delta squad and advance to the district tourney,” said Frank. “We know we will have to bring our ‘A’ game to defeat Evergreen but I feel confident that we will play a good game against the Vikes.”

Archbold picked up a 7-1 regular season victory against Tinora, Friday, May 16. The key was the pitching of freshman Sarah Wyse. In her first varsity game, Wyse tossed a one-hitter while striking out 12 and walking just one.

At the plate, the Streaks banged out 14 hits, led by Courtney Day, who went 4/4 with a double and a triple. Allan, Lange, and Stacy Wyse each had two hits to aid the Streak offense.

Stacy Wyse hit a two-run homer to break the game open in the seventh as AHS was clinging to a 4-1 lead.

“We had 14 hits in the game, which is great, but we stranded way too many base-runners,” said Frank. “The good part is, we had runners on the bases. But we have to find ways to score them to take full advantage of our opportunities.

“Sarah (Wyse) pitched great, and that was fun to watch her go after the batters the way she did.”

The Streaks defeated a good Antwerp squad 12-3, Saturday, May 17 in the first game of a doubleheader.

After watching Antwerp gain a 3-1 lead in the fourth, AHS responded by scoring four runs in the bottom half of the inning. Ducey and Newman each drove in runs to key the rally.

Archbold put the game away with a six-run sixth. AHS hitters collected five big doubles in the inning.

Allan was 3/3 to lead the Streaks at the plate while Stacy Wyse also collected three hits, including a double.

Campos went the distance and gave up only four hits and one earned run, struck out 12 while walking four.

“This was a good win against a good Antwerp team,” said Frank. “They were 19-5 coming into the game, so we must have done some decent things to win the game the way we did.

“There is no question we are swinging with a lot of confi- dence at the plate right now. We will have to continue to hit well to advance down the tourney trail.”

The Streaks picked up the sweep, defeating the Archers in the second game 10-2. AHS hitters stayed hot as they collected 11 hits.

Sarah Wyse picked up her second victory in two days, pitching a one-hitter. Unfortunately for Wyse, the Streaks played a poor game defensively as they committed six errors, leading to the two unearned runs. She struck out nine and walked three.

“The second game was not a pretty game by any means,” said Frank. “We played our worst game of the year, with six errors, but hopefully we can put that behind us and move forward.

“Our offense, once again, carried us, but we are going to have to shore up our defense from here on out or our season will end very quickly.”

The Streaks have won 16 of their last 17 contests.