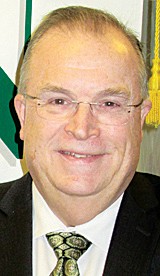 During a special meeting of the NSCC Board of Trustees, Friday, Feb. 2, the board officially named Thomson and passed a motion to prepare an 18-month contract at $185,000 per year.

Thomson is currently the president of Cuyahoga Community College (Tri-C) Eastern Campus, which serves about 6,000 students with 550 full- and part-time staff. He joined Tri-C in 2005 as dean of academic affairs at the Western Campus.

He was selected for the American Council on Education (ACE) fellowship, where he worked with the Ohio Board of Regents and William Rainey Harper College, Chicago, Ill.

Prior to Tri-C, Thomson was an associate professor at Northern Kentucky University, teaching political science. He was involved in many other activities at NKU, including its first capital campaign, raising $1 million among faculty and staff. 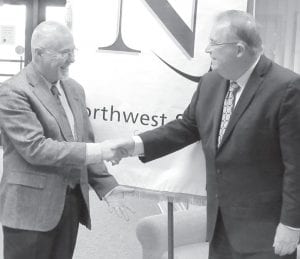 He also created the NKU Master Of Public Administration program.

Thomson holds a doctorate in political science from the University of Kentucky and a bachelor’s degree from Pennsylvania State University.

In an informal press conference, Friday, Thomson said he was attracted to Northwest State because “it’s a very, very good school. Let’s start there.

“I was looking at some of the numbers: $12 million positive impact on the economy; every dollar invested in this institution, the community gets $10 back.

“The community is nice. I really, really like it,” he said.

The NSCC position “means I also get to stay in Ohio, a system that I know very, very well, so that was a positive for me.

Thomson officially starts his new position April 1, which gives him the chance to work with Tom Stuckey, current president, who officially retires June 30.

“That was very important to me, to honor what Tom has done, the incredible job he has done here,” Thomson said.

“My president (Alex Johnson, Tri-C president) has been very gracious about this. I’m going to work a couple more weeks where I am, then I have some time before April 1.

“We basically have the whole month of March that I will be able to come visit here, be here, hang around here, and that way, Tom can really help me get off to a good start.”

NSCC officials announced there were two finalists for the position.

Thomson was selected over Todd Hernandez, current vice president of innovation at NSCC.

Hernandez was a commissioned officer in the U.S. Navy and a graduate of the Navy Nuclear Power program.

He worked for 11 years for Automatic Feed Company, Napoleon, then started with the college in 2010 as director of technical training. He was promoted twice.

Hernandez is a licensed electrical engineer and is working on a doctorate degree in information technology.

Looking forward, Thomson said, “I see lots of good things ahead. There are clearly some challenges. That’s not unusual around the country.

“There are close to 200,000 people who live in the sixcounty (Fulton, Defiance, Henry, Paulding, Van Wert, Williams) area we serve, about 70,000-plus families. Many are underemployed and need our help to get to a family-sustaining wage.

“That’s something Northwest has had a long tradition of doing well.”

Northwest State was established as the Four County Technical Institute in 1968. Four years later, it was renamed Northwest Technical College.

It was elevated to a community college in 1994.

“In this 50th year, we’re going to go out and ask some questions, to see how we’re doing,” Thomson said.

“We want to help people have a better life. Ultimately, bottom line, people bring us their hopes and dreams. When I read the strategic plan it said students have hopes and dreams and needs. And they bring those to us, and we help with credentials or a degree or whatever it is.

“It’s about people having a better life.”

People measure a better life by whether they can earn enough to support their families, Thomson said.

“This is an area that is very good in terms of those things, but I think we’re going to look to see how we can continue to improve on that.”