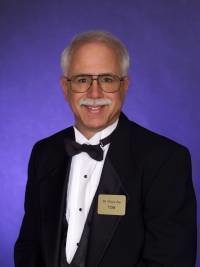 Thomas R. Galvin, "D.J. Tommy Ray," age 60, of Wauseon, lost his battle with cancer and crossed over into the arms of Jesus on Saturday morning, Oct. 2, 2010, in his home.
Tom was born Oct. 27, 1949, in Toledo, to Herbert and Genevieve (Bearss) Galvin.
He was a 1967 graduate of Bowsher High School.
Tom worked as an electrician for I.B.E.W. Local 8, and was also the Wauseon electrical inspector, as well as being the owner of D.J. Tommy Ray musical entertainment business.
At the age of 16 he started playing in bands, and the last band he played with was the Silver Creek Band.
He loved his family, and especially his grandkids!
Tom was a member of the Pettisville Missionary Church.
Among his survivors are his wife, Barbara Borton Galvin, Wauseon; children, Jeremy (Melanie) Galvin, Swanton, Shannon (Matt) Hitt, Swanton, and stepchildren Cyndi (Hal) Cassidy, Archbold, and Dean Ricker, Wauseon; 10 grandchildren; two step-grandchildren; one great-grandchild; mother-in-law, June Borton of Wauseon; mother of his children, Pat Wilder Galvin of Swanton; sisters, Jackie (Dale) Kruse, Minnesota; Becky (Bill) Rehm, Galena, Ohio; and nieces and nephews.
Tom is preceded in death by his parents, Genevieve (Bearss) and Herbert Galvin, as well as his son-in-law, Adam Hall.
A memorial service will be held at 11 a.m. Saturday, Oct. 16, at Pettisville Missionary Church, with Pastor Joanne Powers and Pastor Kent Knorr, officiating.
Family and friends may call from 10-11 a.m. Saturday in the church.
The family requests that memorial contributions be given to the Fulton County Fair Gospel Tent.
Arrangements have been entrusted to Edgar-Grisier Funeral Home, Wauseon.
Online condolences may be offered to the family at www.grisierfh.com.–Posted 10.10, 2:15 pm