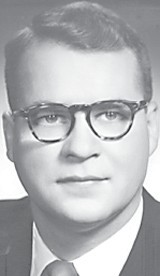 He graduated from Archbold High School and The Ohio State University.

A lifelong resident of the Archbold area, he was an engineer for LaChoy Food Products for over 30 years, and was a consulting engineer on many of the industrial buildings in Northwest Ohio.

He served in the U.S. Army during World War II. He enjoyed woodworking, model trains, outdoor activities, and farming.

He was a member of the Archbold United Methodist Church, and Lions Club.

He was preceded in death by his parents; his wife; two brothers; and three sisters.

Services were held on Saturday at 11 a.m. at Short Funeral Home in Archbold. Interment followed in the Archbold Cemetery.

The family suggests that memorials be given to American Heart Association or American Diabetes Association. www.ShortFuneralHome.com.