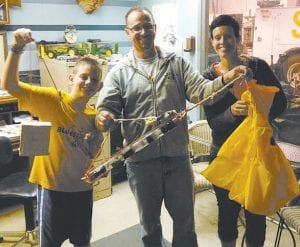 From left, Kenny Walker IV, 9, his father, Kenny Walker III, and Kenny IV’s mother Mandy, with the near-space balloon payload they found behind their home on Co. Rd. U south of Archbold.– courtesy photo

The Kenny and Mandy Walker family, who live on Co. Rd. U south of Archbold, are participants in a nearspace research program after finding the payload from a high-altitude balloon near their home, Monday evening, Sept. 16.

The Walkers were home when Mandy answered the telephone.

Son Kenny IV (Kenny III is the father), 9, said the caller was Gary Brown, a lieutenant with a Civil Air Patrol squadron based on Chicago’s west side.

Kenny said Brown told his mother, “This will probably be the weirdest phone call you’ve ever gotten, but there is a yellow parachute behind your house, in back of your yard.”

The family went out and began looking for the parachute, but after a while, young Kenny said his mom said, “We’re never going to find it. I’m going in.”

The family went inside and had dinner, but the two Kennys couldn’t get the parachute off their minds.

After dinner, about 6:30 pm, they went out again, and the older Kenny spotted it.

The younger Kenny said he tried to walk into the field without crushing too many soybeans, but his father yelled, “Come on, slow poke!”

They brought it up to the house. Then Kenny IV ran into the house to tell his mom and Gavin of their find.

Kenny IV said the payload was two tubes, taped together. Attached to the tube by a strap was a foam box with a camera inside.

The family sent a photo of the payload to Brown.

He noticed a model rocket motor igniter designed to burn away the cord holding the payload to the balloon had not functioned, and therefore was still armed.

A quick text back, and Kenny III disabled the device.

Civil Air Patrol is considered an auxiliary of the U.S. Air Force, and offers programs for youngsters ages 12-17.

The balloon project is designed to give the youngsters, known as cadets, hands-on science experience.

Brown said the balloon is the same type used by the National Weather Service for weather research.

They are designed to reach near-space regions– 80,000 feet and higher– before they burst and return the payload to earth.

The payload featured the camera, plus a position-reporting system that takes data from the Global Position System and transmits it over an amateur radio network.

Brown said the balloon was launched from an airport in Kankakee, Ill. at 10:51 am, Sunday, Sept. 15.

It flew for exactly five hours before the radio signal was lost, at an altitude of about 600 feet.

The balloon batteries would last only nine hours.

Brown said if they didn’t find the payload soon, it may have been lost forever.

Using his personal airplane, he flew to Northwest Ohio and began circling above the Co. Rd. U area.

He circled for about 10 minutes, but couldn’t receive the balloon’s radio signal.

With bad weather coming from the west, Brown flew to Toledo, landing at Toledo Express Airport, where there is an Ohio Air National Guard unit.

Using a car from the OANG, he drove to the Co. Rd. U area.

Driving in the vicinity of the Walker home, he received the signal.

By that point, it was after 8 pm, and he was still dressed in military uniform. Rather than knocking on doors that late, he drove back to Toledo, spent the night, and flew back to Chicago.

The next day, he began making phone calls to homeowners, and got the Walkers.

From Kankakee, about 60 miles southwest of Chicago, the balloon flew on a basically easterly heading, making a few jogs near Auburn, Ind., before landing north of the Walker home.

The straight-line distance was 188 miles with a ground speed of almost 38 mph, and the flight duration was about five hours.

Brown said the balloon went higher than 79,000 feet. It never got into highaltitude jet stream winds. The highest groundspeed recorded was 79 mph.

A balloon launched by the same CAP unit in October 2012, landed in Oregon, east of Toledo, where it was discovered by another family.

That balloon recorded ground speeds as high as 135 mph.

The first balloon also was launched from Kankakee. Its flight path was very close to this year’s balloon.

“It’s real obvious the winds favor an east-northeast direction, almost as if there was a pipeline between Kankakee and the Toledo area,” he said.

Kenny IV took the balloon payload to Archbold Elementary School to show his fourth-grade classmates, before it was shipped back to the CAP squadron.

“They thought I was really lucky, and that it was really cool that we found it,” he said.

Finding the balloon payload was a once-in-a-lifetime thing. That, Kenny IV said, is why he went outside to find the balloon “before anyone else did!”