Third Grade Visit To Amish Community Is Best Day Ever! 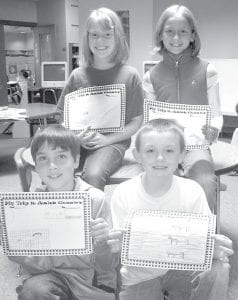 These Archbold Elementary School students, members of Tami Manley’s third grade class, were among those who went on a field trip to visit an Amish community in the Camden, Mich., area. The youngsters drew pictures based on their visit. Interviewed were, front row from left: Brendon Johns and Hunter Beaverson. Back row: Marin Parsley and Dakota Stamm.– photo by David Pugh

But at the same time, the student of Tami Manley said living the life of the Amish is “not an easy task.

The Amish are members of Christian denominations, who in many ways shun modern life for simpler ways. They avoid many modern conveniences such as electricity, automobiles, and indoor plumbing.

Manley said she’s been taking her students to visit the Camden community of about 400 for 15 years.

“Their beliefs are different,” Parsley said.

“They’re kind of the same as Mennonites. Each are sort of the same,” said Dakota Stamm.

“They believe in a simple life,” Brendon Johns said.

“They believe in no video games, lights, or TV,” Johns said.

But Parsley said the Amish will use hand-crank flashlights, and they’ll use electric motors on things like mixing bowls.

Stamm said the Archbold students wrote three letters to the Amish, and got one or two back.

In the letters, each group asked questions of the other.

Johns said, “My pen pal’s favorite thing to do was chores. He did outside work, while the girls did inside work. He helped with the crops and stuff. He was near the horses.”

Horses do the work of tractors on Amish farms.

“A team of horses will be six to eight. They’ll hook them up to plows,” Parsley said.

“My pen pal asked me if we love to chore. I said kinda, sorta, but not really,” Parsley said.

“They asked some questions, like if we made our own clothes, or if we buy them at the store,” Stamm said.

During the visit, Johns said he found the Amish youth “kind of shy.”

His pen pal “shook his head, and pointed. He hardly asked me any questions,” he said.

“They did it (sang) in German,” said Hunter Beaverson.

“Our parents encouraged their children to keep the conversation going,” she said.

Stamm said Amish boys and girls go to school until the eighth grade. When they reach 18, they can choose whether they want to remain part of the community, or go into the world.

Beaverson said he thinks the opportunity to choose is a good thing.

Stamm said women in the Amish community “just grow up, go to school, and usually marry a farmer, have children, and do the same thing.”

Stamm said she would like to have a career as well.

Manley said the objective of the trip was for her students to learn how their ancestors lived years ago; but yet, many things are similar.

“Our life is a lot easier with the tools we have– so many things,” she said.

Another objective– the trip allows students to compare cultural practices and products of other communities in the United States.

Beaverson shared one discovery he made.

He said the Amish boys and girls were nice.