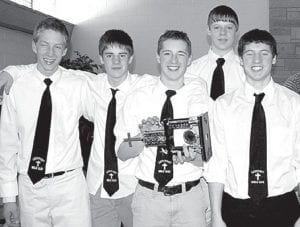 “Now, brothers, I want
to remind you of the gospel
I preached to you, which
you received and
on which you have
taken your stand.”
I Corinthians 15:1

This was one of the four verses that Lydia Wyse, a home-schooled senior quizzing with Central Mennonite Church, correctly quoted at the third Bible Quiz meet, Sunday, Jan. 24, at Lockport Mennonite Church.

Prize boxes were awarded to three teams who most improved their average score compared to the first two meets. “Unseen,” from North Clinton Mennonite Church, had a 38-points-per-match improvement over earlier meets. The team also won all three matches and had the third-highest average score of the day. Members are Jacque Seigneur, Tessa Yoder, Lorenzo McKeever, Kira Andre, and Chris Schroeder.

The Bible Quiz team scoring the most was “Simply,” of West Unity. Members are April, Galen and Melissa Short and Alexis, Collin and Whitney Stamm.

Gerald Schoenhals, area coordinator, announced that, back by popular demand, team spirit awards will be given at the next meet. Teams can display their names with a song, skit or dress.

The next meet is Sunday, Feb. 7, 2 p.m., at Zion Mennonite Church. Scripture covered will be I Corinthians 15:35 through II Corinthians 4.


More From Religion Go To The Religion Section