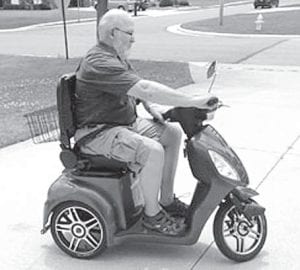 Archbold has certainly taken its lumps over Mark Miller’s scooter.

After a Toledo television station broadcast the news that Archbold police cited Miller, who can’t walk long distances, for riding his new “mobility scooter” on the sidewalk, the floodgates opened.

The station’s Facebook page received over 460 comments; most ranged from criticism of the police to insulting the police and citizens of Archbold.

Miller’s scooter can hit a top speed of 18 miles per hour. The village definition of a motorized wheelchair says such a device can’t go more than 8 mph on the sidewalk.

And for this, Archbold has received a black eye, publicity-wise.

Maybe it’s a case of the village being overzealous enforcing the law.

Now it’s wrapped up in a court case, which, as it proceeds, will only make things worse for both sides.

TV stations, always are looking for a quick hit piece, will drag Archbold through the mud again.

The Millers will need to spend money on attorney fees just so Mark can ride the scooter, for which he already paid $2,000. Archbold will also have to spend taxpayer dollars on attorney fees.

There is a way out: Archbold can change its ordinance to allow mobility scooters that exceed 8 mph, but limit scooter speeds to 8 mph on sidewalks.

As long as there are no complaints, and the police don’t spot anyone zipping along faster than that, problem solved.

Result: Miller, and anyone else unable to walk long distances, will get to ride their mobility scooters on the sidewalks, and Archbold becomes more friendly to those with disabilities.