The Drought Is Over!

Streaks Win At Least A Share Of NWOAL Title 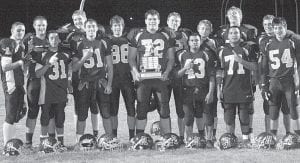 The drought is finally over for the Archbold (9-0, 7-0 NWOAL) football team.

With a 21-7 Northwest Ohio Athletic League victory over visiting Wauseon (4-5, 3-4), Friday, Oct. 22, Archbold has wrapped up at least a share of the league championship.

The Streaks haven’t won a league title since 1990.

“I am happy for the kids and all the guys that played in the past years and didn’t win a title,” said Bryan Miller, AHS head coach.

“I really wanted this for coach Downey. He won eight of (the league titles) and won the last one; he has a lot to do with this.

“It’s the greatest feeling, winning the title. Nobody will ever take it away from these guys.

“We still have week 10. Hopefully the guys’ parents didn’t teach them to share too well when they were kids, because we certainly don’t want to share the title.”

The win also keeps the Lions Club Trophy, given to the winner of the AHS-Wauseon game, in the Archbold trophy case for another season. The Streaks have won the coveted prize between the two communities the last three years.

Taking the opening kickoff, Wauseon used its ground game to chew up yards and the clock. Starting on its own 20-yard line, the Indians used the power running of Dustin Makula and Jesse Finney.

Makula pounded out 31 yards on two carries, Finney added 14 more, and the Indians were picking up first down after first down.

Troy Lind rattled off 7 yards on two carries, Finney picked up yardage, and quarterback Landon Schaffner got into the mix.

The Streak offense, which was chomping at the bit to get onto the field, came up empty, going three-and-out.

Following the AHS punt, Wauseon’s Tanner Harper coughed up the ball. The Streaks recovered on their own 40-yard line.

The Indians again chewed up the clock but were forced to punt as their drive stalled after 10 plays.

Morton connected with Tyson Dietrich for 15 yards, then found Danny Young for 31. Morton picked up 21 yards on the ground and Noah Keefer added 6 more, taking the ball down to the Indians’ 8-yard line.

One play later, Morton crossed the goal line. With the Aaron Bontrager pointafter touchdown kick splitting the uprights, the game was knotted at 7.

“I don’t think we played that great of a half, and Wauseon played a great half,” said Miller. “We told the kids at halftime just go out and do what you’re capable of doing, and we will be fine.”

At the beginning of the season, one big question for Archbold was going to be the defense.

But after week nine and giving up an average of only 11.8 points per game, all the questions seem to have been answered.

The Indians took the early lead and racked up 175 yards of total offense in the first half. They finished with 204 yards of offense, and were shut out of the end zone in the second half.

“Our defense is amazing,” said Miller. “I don’t understand it. The defense was out there for a long time, and we still held Wauseon to seven points. We have done that all year long.

“I bet this is the fourth game in a row we have given up 200 yards rushing but haven’t given up more than two touchdowns in a game.”

On the other side of the field, the offense was clicking.

Taking the opening kickoff of the second half, Anthony Reyes had a return of 21 yards to the Streaks’ 37-yard line. Morton hit Keefer for 11 yards for a first down.

Morton was dropped for a 3-yard loss. Facing secondand 13, sophomore Tyson Dietrich hauled down a 25- yard catch, and then Young added a 25-yard reception.

Two plays later, Morton spotted Dietrich in the back of the end zone for a 6-yard TD toss and a 14-7 lead.

“Tyson is just a weapon. He is so big and athletic, he makes plays and did a great job for us,” said Miller.

On the ensuing kickoff, Bontrager laid down a perfect line drive toward the Wauseon sideline.

The speed of Young beat everyone to the ball, giving possession right back to Archbold on the Wauseon 48-yard line.

“Aaron did a nice job on the onside kick,” said Miller. “He kicked a little deeper than we wanted to, but Danny made a great play, streaking down the sideline. That was a huge play for us.”

Keefer was dropped for a 6-yard loss but gained 3 back on the next play.

Facing third-and-16, Morton lofted a pass toward the right side of the field. It looked to be incomplete, but Dietrich brought the pass down for a 33-yard gain.

The Indians were tagged with a face mask penalty on the play, which moved the ball down to the Wauseon 17-yard line.

Morton put the finishing touches on the NWOAL title and the Lions Club Trophy with a 17-yard touchdown toss to Desmond Sleigh.