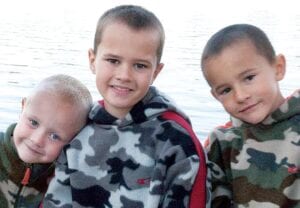 Top: The Skelton brothers, who disappeared from Morenci, Mich., in 2010. From left: Tanner, who was 5 at the time of their disappearance; Andrew, 9, and Alexander, 7. Below: The boys, as they might appear today, in age-progressed photos prepared by the National Center for Missing & Exploited Children.– photos courtesy National Center for Missing & Exploited Children

A slim hope, but hope.

“I don’t want to sound coldhearted, I guess, but until I have 100% concrete proof, I will always have hope that they’re still alive,” she said.

“With that being said… I don’t know how anyone could have concealed three very active boys for 10 years without someone picking up that something wasn’t right.

“The lead detective… said, ‘I know what evidence we have, but I’m still going to hold hope because we don’t have their bodies.’”

She never thought the search for the boys would eclipse the 10-year mark, “but here we sit, 10 years later. Another set of age-progressed photos…and no answers.”

In 2010, John and Tanya Skelton were in the middle of a divorce. Custody was an issue. 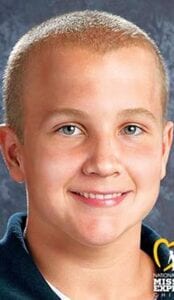 Over Thanksgiving, John had the boys for two days. They were last seen on Thanksgiving Day, Nov. 25, playing outside at his home.

Evidence indicates John traveled between 4-7 am, Friday, Nov. 26, in parts of northwest Ohio.

Law enforcement officers were, and still are, interested in sightings of John’s dark blue minivan between 2:30 pm on Thanksgiving and 1:30 pm the following afternoon.

Reports say on that Friday afternoon 10 years ago, John attempted to hang himself. A friend reportedly took him to an Ohio hospital.

John first told investigators he turned the boys over to an underground organization to prevent them from being abused, allegedly by their mother.

He also said he gave the boys to a “Joann Taylor,” who was supposed to return them to Tanya.

Hundreds of volunteers, including firefighters from Archbold, Fayette, Wauseon, and Ridgeville Corners fire departments, searched portions of Lenawee County, Mich., and Fulton and Williams counties in Ohio, with no luck.

Law enforcement has treated the case as a murder investigation since February 2011.

John accepted a plea-bargain agreement in July 2011. After pleading no contest to three counts of unlawful imprisonment, he was sentenced to 10-15 years in prison.

There have been leads over the years.

Soon after the disappearance, the boys were reportedly sighted in a donut shop in Sandusky, but that proved fruitless.

In September 2018, workers cleaning out a shed in Missoula, Mont., found a box of teeth and bone fragments.

Tanya said the bones “were of three children, and I believe they were all male. It triggered something, somewhere.

“The Michigan State Police reached out (to investigators in Montana), and said, ‘Listen, we have these three missing boys about the same age as the bones are. Let’s get these tested right away.” 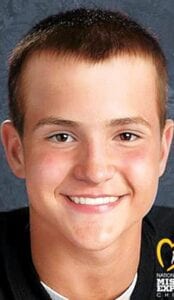 But the bones proved to be more than 99 years old.

John had a hearing before the Michigan parole board on July 29.

In March, Tanya said she wrote a letter to the parole board.

She said while John sits in prison with certain rights, “I said, ‘Where are Andrew, Alexander, and Tanner’s rights to be in a loving home with their mom, to enjoy time with their sisters, nieces, nephews, and all the extended family who love them so much?

“’The right to be in school and enjoy all the milestones they have missed… They should be home, living a comfortable, loving life, not hidden away where only one person, John Skelton, knows where they are.’”

His parole was denied.

Today, John Skelton, 49, is held at the Bellamy Creek Correctional Facility, near Ionia.

His next hearing before the board is in 2021.

In a 2012 interview, Tanya said at one point, she hit rock bottom. She checked herself into a psychiatric hospital in August 2011.

“There were a rough few months,” she said at the time.

She’s working and has a special someone in her life; they’ve been together for five years. They’d known of each other their whole lives, but after he divorced and returned to Morenci, “we ran into each other and became friends.”

Is Thanksgiving a terrible time for her?

“This year, being completely different from any other year– we are not able to get together– it’s really kind of weird because it was like (Thanksgiving day) was like a Saturday around the house.

“It wasn’t quite the same as going to my parents with my siblings and my two daughters and all the grandkids and the nieces and nephews and grand-nieces and -nephews.

“I enjoy all of that, but it’s obvious the boys are missing. The boys aren’t here with us, doing our traditional things.

“It was like all of what 2020 has been for most of us. It almost was an easier anniversary date, because we weren’t able to be all together.

“There wasn’t anything that stood out other than the date on the calendar.”

She said the Morenci community has supported her, and while she has been through some difficult experiences with the media, “for the most part, everyone has been amazing.

“I love doing phone interviews so I don’t have to make sure my hair is done.