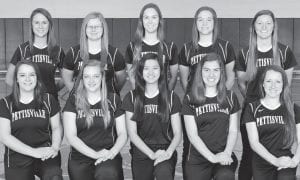 Stahl has compiled an 80- 48 record in her seven years at the helm. She hopes to improve on an 8-12 record last year with a 5-5 finish in the Buckeye Border Conference.

“We have five seniors on the team this season that possess great leadership qualities and have plenty of playing experience,” said Stahl.

“Pitching and catching will be another strength.

“I expect our hitting to be competitive and progress throughout the season.

“We will probably be weak in defense, as there will be players in new positions. The inexperience will be difficult at first, but I expect our players to rise to the challenge and get better with more repetitions and experience as the season progresses.

“We also lack depth in some positions, so again, inexperience may be a factor.”