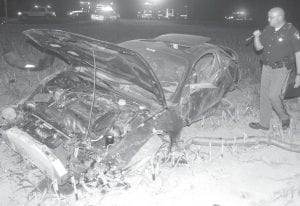 Wesley Nartker was driving this car when the vehicle crashed about 9 pm, Sunday night, Aug. 19. Nartker, a 16-year-old Pettisville High School junior, was listed in critical condition Monday at Toledo Children’s Hospital. The crash occurred on Co. Rd. A, west of Co. Rd. 21. ALS-1 and Archbold Rescue were called to the crash scene. Rescuers discovered Nartker had been thrown from the vehicle. He was transported to the Fulton County Health Center, then flown by helicopter ambulance to Toledo Children’s Hospital. Mike Lane, PHS principal, said Nartker’s injuries are serious, but there is a favorable outlook for recovery. Nartker’s accident will be discussed with PHS students on the first day of school, today, Wednesday, to quell rumors about his condition.– photo by David Pugh