Teams And Fans Have Fun At Second Bible Quiz Meet 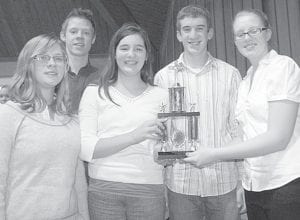 Enthusiastic fans along with mixed team quizzing were the highlights at the second Bible quiz meet, Sunday, Jan. 15, at North Clinton Mennonite Church.

Quizzers knew the teams with the best crowd spirit would be chosen for fun closing activities. Fans were prepared with creative cheers, pom-poms, puppets, noisemakers and posters.

With all the fan support, staffs had a hard time choosing just three of the 17 teams.

As a fun ending, teams and fans from Zion, Eastland Baptist and Sonrise competed to see who could eat a whole loaf of bread the fastest, and, “Let nothing be wasted.” (John 6:12b)

The meet also featured mixed team quizzing as youth from different churches quizzed as teams for one or two matches.