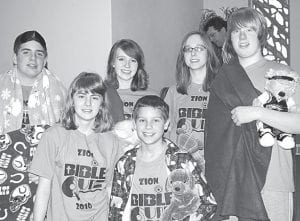 Dressing in pajamas, carrying pillows and dozing off at the end of their team cheer, “Fallen Asleep,” Zion’s Bible Quiz team, won a team spirit award for displaying their team name. But when it came to quizzing, the team was wide awake as they scored 425 points and won all three matches. Members are, front row from left: Katie Yoder, Josh Leichty, Jonny Lantz. Back row: Zack Zimmerman, Meg and Hannah Short.–courtesy photo

With so many creative ideas, it was a hard task to choose which three teams received prize boxes.

Quizzers have really stepped up to the inspiring material of I and II Corinthians. Eighty-eight have already answered a biblical question.

A season-high of 20 youth quizzed out in all of their matches Sunday; nine also quizzed out in all their previous matches. They are Tony King, West Clinton; Paul Schoenhals, Central; Seth and Eliot Nofziger, Lockport; Ciara Caldwell and Tiannah Sheets, Poplar Ridge; Alexis, Collin and Whitney Stamm, Sand Ridge.

For the season, 34 quizzers have quoted warm-up memory questions, including chapter and verse. Jacque Seigneur, North Clinton, correctly quoted all six possible memory questions in her matches on Sunday. Tony King, first-year West Clinton quizzer, leads in the memory category. The next five, along with Jacque, are April Short, Eliot Nofziger, Phillip Nafziger, and Ciara Caldwell.

“Fallen Asleep” and “Shipwrecked,” Lockport, won all three of their matches Sunday and tied for the third-highest average score of 142. “Wild Beasts” and “Simply” from Sand Ridge lead the area with 12- 0 records and were the top scoring teams Sunday, with an average of 150 and 168 points, respectively.

The fifth meet is at 6 p.m., Sunday, Feb. 14, at Poplar Ridge Church of the Brethren. Quizzing material is II Corinthians, chapters 5 through 8.