Tasty Lunches Good… And Good For You 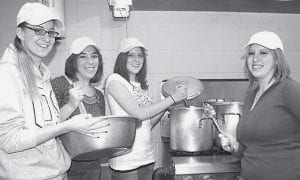 For four Archbold High School seniors, a lot of hard work and some creativity resulted in each receiving a $2,500 scholarship.

The contest, called “Lunch 101: Food For Thought,” was sponsored by ProMedica Health Systems.

The AHS girls took second place in the competition. Originally, there was no prize for finishing second, but the competition’s judges were so impressed with the entries, they created prizes for second and third places on the spot.

Kelley said she was going through scholarship opportunities when the girls discovered the lunch competition.

The challenge was to create 10 meals- two weeks of school lunches- for elementary students, for $30 or under.

The girls also had to create a 10-minute exercise activity.

Work started at the end of October.

They went to Archbold SuperValu Foods to price the ingredients.

“Finding the prices of everything was the hard part,” Short said.

They had to calculate bulk size costs to the cost per serving.

Fredrick said she determined that a teaspoon of salt cost .008 cents.

“I felt dumb doing all that math,” she said.

“Salt is not of the major costs in our cafeteria,” Kelly said.

Each team in the competition prepared a meal for the judges. The Archbold girls chose the Sloppy Josephine, essentially a Sloppy Joe made with turkey.

Krueger found the recipe on the Internet.

For their other menu items, they took conventional meals and substituted healthier foods, such as whole-grain buns and whole-grain pastas for white buns and white pasta.

Short, the picky eater of the bunch, served as the taste-tester.

“No child would eat that if I won’t eat it,” she said.

The four chose dance as the physical activity. They even tested their dance activities on Archbold elementary students.

“They seemed to have a lot of fun,” Kelley said.

After submitting their entries, the girls were told they made it to the finals, held Saturday, Jan. 31, in Toledo.

As the presentation date neared, the girls met more often. Fredrick said it was Short who kept them on task.

“‘Have we got this done? Is that taken care of?'” Fredrick said, quoting Short.

For the presentation, the girls created a television talk show with Kelley, or “Rachel Joy” (using her middle name), as host.

Fredrick played a nutrition expert. Short was an exercise consultant, and Krueger took on the role of chef.

During the show, they prepared their Sloppy Josephine meal, heating it in a microwave oven.

Kelley said they worked so hard they had memorized their presentation scripts.

“We can still do them now,” one of the girls said.

The girls were confident going into the competition, but once they were there, they saw that other teams had worked just as hard.

When the judges went in for their deliberations, only one prize for first place was to be given out.

But when the judges gave their decisions, they also announced they had created the additional prizes.

Fredrick said the four girls were already close friends, but the competition experience brought them closer.

“We actually got to do something productive,” Short said.

“We got to do something creative,” Kelley said.