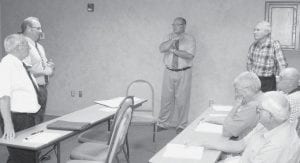 Standing, from left, Paul Barnaby, Joe Short, and Dean Genter, Fulton County Commissioners, talk with Paul Liechty, Wauseon, about a proposed third hearing on the issue Thursday night, Liechty was concerned about how a sales would impact the general public’s perception

The balance in the Fulton County EMS fund and the perception of the county commissioners by the voting public were big topics of discussion at the third hearing on a proposed increase in the county sales tax.

The third hearing was the first hearing held in the evening. It was conducted Thursday, Sept. 3 at 7 pm at the Robert Fulton Building.

The Fulton County Commissioners again presented their plan to rescue the county general fund from its current budget shortfall, caused by declining revenues from the sales tax, state funding, and interest income.

The general fund pays for day-to-day operations of elected officials. It pays for everything from keeping mortgage records to operating the court system.

Charts presented by the commissioners showed revenue falling, and expenses being cut to remain below revenue- but cuts in expenses not keeping up with the revenue shortfall.

As a result, the county is eating into its carryover budget, a form of cash reserve county offi cials try to maintain.

The commissioners presented a plan to deal with the general fund problem.

•Increase the sales tax one half of one percent (0.5%), or a half-cent per dollar. The commissioners anticipate this would raise about $1.45 million. The additional tax would expire in three years.

•Ask the county budget commission to roll back some property tax levies, which are collecting more than necessary.

•Place a three-year freeze on the wages of county employees, with no “balloon” raise at the end to make up for raises missed.

•Continue the Early Retirement Incentive Plan, or ERIP, for another year. County workers can get up to one year of additional service credit for retiring early.

•Review hours of operation of county offices, with an eye toward reducing payrolls.

Trudel said based on the fund’s balance and anticipated expenses, the EMS system could operate for more than 22 months from the cash balance alone.

Reducing the millage of the EMS levy would “show good faith” to the county taxpayers.

The county operates its business from over 200 accounts, or “line items.” Funds from one line item cannot be intermingled with another. Money cannot be moved from the EMS fund to the general fund. At the same time, reducing EMS fund revenue won’t impact the general fund.

Joe Short, president of the commissioners, said only the county budget commission, composed of the county auditor, treasurer, and prosecutor, can reduce millages.

Trudel asked if the commissioners had specifically asked the commission, in the form of a letter, to reduce the millage; Short said no.

Phil Liechty, Wauseon, said he was concerned about the perception of commissioners in the mind of the voting public.

He said he had experience in Washington, D.C., and had returned to Wauseon, his hometown.

“Whether you succeed depends on the level of confidence and trust in you.

“I encourage you to take a close, long look at the budget, and if there is any way to avoid enacting the one-half percent sales tax hike, you really should do it,” he said.

He said the half percent increase “is not going to get you anywhere,” and could, in fact, do more damage to the commissioners’ reputation than good for the budget.

Liechty said he wanted the three commissioners, all Republicans, to remain in office, to avoid handing the seats over to “the party of the other side.”

He said if Democrats are elected, taxes would increase greatly.

Short said all three commissioners were not thinking about reelection, just “doing our best for the county.”

“I said I wouldn’t let the county go down. If it came to a point that we had to have it, I would stand up.

Jump into the middle of things, get your hands dirty, fall flat on your face and then reach for the stars.- Joan L. Curcio