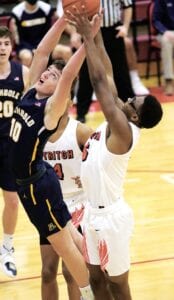 It took the Streaks (21-4) all 32 minutes to defeat the Cardinals 59-56 to claim their 18th district title in school history and advance to a regional semifinal tonight, Wednesday, 8 pm, against Ottawa-Glandorf at Elida.

“We just gutted it out,” said Frank of the win over the Cardinals. “We talked about having some grit and about sticking through some tough times and persevering.

“I just give all the credit to these kids. They went out and competed for 32 minutes, and I couldn’t be more proud of this group.”

Stritch, who defeated Eastwood 75-65 in the district semifinal, used a smothering defense to confuse the Streaks at the start.

The Cardinals scored the opening bucket, but Noah Gomez scored a layup and a three-pointer for a 5-2 lead.

Stritch answered with a 6-0 spurt, but this game was a game of runs, and it was Archbold’s turn.

“They pressed us about the whole game, and we knew we had to take care of the ball,” said DJ Newman.

The Streaks scored the next nine points to reclaim the lead, 14-8.

“We started to attack (the defense),” said Frank. “It’s just a matter of being in that attack mode, and not in a defensive mode on the offensive end.”

“We knew this was going to be a game where you had to adjust and adapt to what was going on,” said Gomez. “That’s what we did.”

Jhaiden Wilson, who torched Eastwood for 38 points and averaged 26.5 points per game during the regular season, canned a trey to close within three, 14- 11, after one.

Austin Roth came off the bench to bury a three to start the second. Newman then turned a steal into a layup to put AHS up 19-11.

Leading 24-16 after another Roth three-ball, it was Stritch’s turn to run.

The Cardinals ran off 13 unanswered points in the last five minutes of the half to go into the locker room up 29-24.

The third period resembled a chess match, with the teams swapping scores and the Cardinals holding on to their lead.

Archbold pulled to within a point, 34-33, on a Newman bucket, but Stritch had an answer every time and outscored the Streaks 8-2 over the final minutes of the Third.

Newman got open in the corner and drained a three at the buzzer to pull the Streaks to within four, 42- 38, going into the final eight minutes.

Newman’s shot seemed to give the Blue Streaks some momentum entering the final quarter.

Alex Roth canned a three, Gomez scored on a transition bucket, and Newman scored a jumper in the lane to push the Streaks on top, 45-42.

Stritch’s Wilson buried a three and Dwayne Morehead hit a free throw to get the lead back, 47-46, with five minutes left.

Morehead scored Stritch’s next five points to get the Cardinals within four, 56- 52.

After Newman missed the front end of a one-and-one, Romel Hightower scored on a layup with 33 seconds left to cut the difference to 56- 54.

Austin Roth was fouled and went to the line with 25 seconds left. The senior hit one free throw to put AHS up by three, 57-54.

Stritch almost turned the ball over on its next possession, but a jump ball situation favored the Cardinals, who retained possession with 15.5 seconds left.

The odds-on favorite to take the shot was Wilson. With four seconds left, his desperation three hit the side of the rim, but Morehead was there for the offensive putback to close the gap to 57-56 with 1.3 seconds left.

“We did a really good job on Wilson,” said Frank. “Some of their other guys hurt us, but that’s a credit to their guys. We just didn’t want to see him get 38 points again.

“Bottom line is, we said we can’t give up three. You want to advance to the next level– you don’t give up a three.”

On the inbounds play, Newman went long for the pass and was fouled with .2 seconds left.

The junior drained both free throws.

“A little bit of nerves, but with .2 seconds there wasn’t much nerves, and it was a great feeling,” said the junior.

All Stritch could do was throw a long inbounds pass. It was knocked away and the Streaks celebrated the hardfought 59-56 victory.

“That’s a really good team,” said Frank. “We had no visions of coming in here and blowing them out.

“When we got that lead I knew they would come back. We said there was gonna be runs in this game. There was.

“Credit to our guys for competing for 32 minutes, because that’s how long it took for us to win that game.”

“Last year we got knocked out at this same place, so there was a little motivation going into that,” said Gomez. “We just had a fire under our butts. It’s a good feeling getting it done tonight.”

Newman led all scorers with 17 points. Alex Roth chipped in 13, while Gomez and Ashton Kammeyer each scored 10.

Wilson and Hightower led Stritch with 15 points each, while Morehead scored 10.