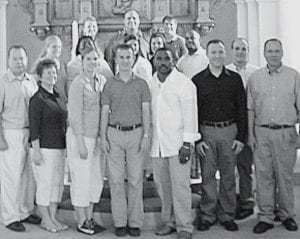 Kent Vandock, Archbold High School choral music director, front row, center, along with members of a Bowling Green State University alumni chorale who traveled to perform in Sweden in July. Several family members accompanied the chorale. The group had an opportunity to sample Swedish culture. To the left of Vandock is his wife, Danielle.- courtesy photo

How do you tell Americans from Swedes in Sweden? Look for the athletic shoes.

“All the streets are cobblestone, so they wear a flexible shoe,” but it’s not what we’re use to in the U.S. he said.

Vandock was part of a chorus made up of Bowling Green State University alumni who went to Sweden July 9-18.

“When I was in school, I belonged to a performing ensemble called the Collegiate Chorale, directed by Mark Munson. I was a member all four years,” Kent said.

As a result, Munson arranged to take alumni members of the Chorale to Sweden with him, “and since I was a member, I was extended an invitation,” he said.

Accompanying Kent on the trip was his wife, Danielle, and his parents.

The group’s first “performance” was at the Detroit airport, as group members gathered and waited for their flight, Danielle said.

Once in Sweden, their first real performance was at a local church in Kristianstad (“stad” means “city”, he said).

All but two of their performances were lunchtime concerts, in churches and cathedrals.

Danielle said many of the churches have parts that date back to the 12th century.

But not all were massive and huge, she said.

“When World War II happened, Sweden was neutral. When the rest of Europe was trying to rebuild, Sweden invested in the arts, visual and performing,” he said.

“Churches, musicians, artists, all were sponsored by the state until the last 10 years,” he said.

The music they sang was, “a lot of traditional American music, like spirituals, by American composers.”

There were no patriotic American songs, Kent pointing out the group was, “sensitive to the church setting.”

Among the music was a piece by William Billings, an American composer of the colonial period, “Sometimes I Feel Like A Motherless Child,” a Negro spiritual by J. W. Johnson and J. R. Johnson, and “In Flanders Fields,” a poem set to music about World War I.

And how did the Swedes react?

They also heard some Swedish music, which was, “a very neat experience.”

“They sing with a very straight tone, with no vibrato in their voices,” he said.

Kent said the Swedes are friendly, and only the elderly don’t speak some English.

Their first two nights in Sweden were spent in hotels; after that, they stayed with host families. While there, they saw a car than ran on methane gas.

One night, one of the host families served pizza, Swedish style.

“It’s a little thinner, made in a rectangle, with less sauce and more herbs, many right out of the garden,” she said.

They don’t put pepperoni on their pizza, but there is salmon and minced ox meat, she said.

At one point, they traveled to neighboring Denmark.

“It’s nice in the European Union. You can travel just about anywhere, and nobody asks questions. Nobody worries about passports,” he said.

But the trip was about the music, and singing in the old cathedrals, “was a very unique experience. Nothing around here gives you that same acoustical experience.”

Kent said he will be able incorporate some of his experiences into his music classes at AHS.

In a letter to some of his students, Kent said he stood in the church at Ystad, which was the home church of Dietrich Buxtehude, a contemporary of Johann Sebastian Bach.

“I saw the exact organ he played hundreds of years ago.

“You can bring up a picture of it, but being there creates a connection in reality.

“You don’t make that connection until your standing in the church,” he said.