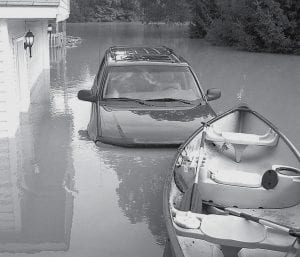 Above, Jennifer Sauder-Nichols’ sport utility vehicle sits in floodwaters outside her Ottawa home. Water began rising last week, eventually filling the basement, and was two feet deep on the main floor. The canoe in the foreground is how Jennifer, an Archbold native, and her husband David got to and from the house. They docked on the back porch. The home’s electrical distribution box is completely submerged, yet somehow, the electricity stayed on, as evidenced by the outside garage lights.

If you think you had a bad week, talk to Jennifer Sauder- Nichols, daughter of Rachel and Steve Sauder, Archbold.

The 1996 Archbold High School graduate and her husband, David, have lived in their home on the south side of Ottawa for three years. Even though the Blanchard River abuts their property, they’ve never had standing water in the basement. The river is at the back of their property, over 300 feet away.

Last week, water was two feet deep on the main floor of the house. When they were allowed into the neighborhood during the flood, the only way they could get to their home was by using a neighbor’s canoe. They docked the canoe on the back porch.

They have flood insurance, but it covers the structure and things like the furnace and air conditioner. It doesn’t cover appliances like the stove, refrigerator, dishwasher, or television.

Her sport utility vehicle has been sitting in floodwater over the wheels. It was declared a total loss.

At right, Jennifer, with floodwater in the background.- courtesy photos

Then add the fact that Jennifer is expecting a baby in November.

“We wear big galoshes,” she said.

In the three years they have lived in the home, Jennifer said the water has surrounded the house and garage, but never was in the house.

There were warnings Tuesday, Aug. 21, that the Blanchard could reach 23 feet above flood stage. That didn’t concern Jennifer and David. They had seen water as high as 27 feet, and not had a problem.

Even so, they sent her younger brother, Joe, down to keep an eye on the house.

At 7 pm that Tuesday night, there was no water in the yard, but by 7:15 pm, water surrounded the swimming pool and was close to the driveway.

That night, they added a third sump pump in the basement, but with all three going, the water continued rising.

When it reached the electrical distribution box, they decided they had to leave. They were out of the house by 3 am Wednesday.

With the basement full of water and the electrical box fully submerged, the electricity somehow stayed on, Jennifer said. “It’s amazing, but scary.”

To clean up the house, Jennifer said all the carpeting and padding must be removed, and the walls removed four feet up from the floor.

With the baby due in November, they’re under a time constraint.

This is not the first disaster Jennifer has been through.

During the blizzard of 1978, Jennifer’s mother was pregnant with her.

“You have to have humor,” she said.

It couldn’t get any worse, right?

Yes, it could. She was laid off her job on Monday.