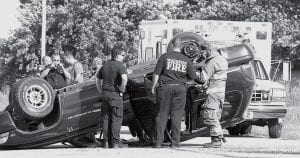 Wauseon Rescue workers look over the wreckage of a sport-utility vehicle, which crashed on US20A Friday afternoon, Sept. 14. When the crash was originally reported to Fulton County Sheriff Department dispatchers, there was some confusion about the location, and Archbold Rescue was dispatched to the wrong place. A later call sent Wauseon Rescue to the correct location. – photo by David Pugh

Semis were backed up on US20A Friday afternoon, Sept. 14, after a sport-utility vehicle, driven by a rural Wauseon woman, rolled onto its top and came to rest in the middle of the highway.

The Ohio State Highway Patrol report on the crash states Jeni Smith, 47, rural Wauseon, was driving the SUV east on US20A, when at about 4:20 pm west of Co. Rd. 19, the vehicle went off the right side of the road.

The report states when she tried to bring the vehicle back onto the roadway, it struck the edge of the pavement and rolled over, coming to rest on its top, in front of the Dunkard Brethern Church, between Co. Rds. 19 and 18.

Wauseon Rescue responded, and transported Smith to FCHC, where she was treated and released.

Troopers cited her for operating a motor vehicle without reasonable control.