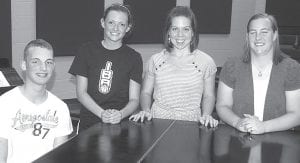 The Archbold High School Chorale, a choir made up of more than 50 students, received a superior rating in state competition, the first time in 14 years. Several officers of the group talked about the experience. From left: Caleb Wyse, secretary; Tressa Parsley, librarian, Erin Nafziger, president, and Morgan Cody, secretary. Nafziger and Cody are seniors; Wyse and Parsley are juniors.– photo by David Pugh

For the first time since 1998, the 56-member Archbold Chorale received a superior, or I, rating at state music competition.

After receiving a superior in district competition at Archbold on March 16, the Chorale and the AHS women’s chorus went to Van Buren High School, Saturday, May 5.

Chorale members waited in a cafeteria for the scores to be posted.

Morgan Cody, a senior and a secretary of the Chorale, said, “when we got a I, the whole cafeteria erupted.”

The Archbold Women’s Chorus received an excellent rating, a II at state.

“There is a fine line between a I (superior) and a II (excellent). It depends on which adjudicator (judge) you get. It all comes down to the adjudicator,” Cody said.

Caleb Wyse, a junior and another secretary, said one adjudicator “pointed out the things we did wrong, but then said overall, our tone was good, and the way we followed our director was good, but he couldn’t get over the pickiness.”

For competition, students sing four songs. One of the most difficult elements is sight-reading.

The choir is given a new song it’s never seen before.

Erin Nafziger said the choir is given four minutes to go over the song.

“We can speak the rhythm. Mr. V (Kent Vandock, director of choral activities at AHS) goes over it, and says, ‘watch out for this jump, watch out for that rhythm,’ Nafziger said.

“Then we sing it through once with accompaniment. Then for one minute, Mr. V can go over any other notes he wants,” Nafziger said.

Then they sing for a score without accompaniment.

“We’re scored not only on accuracy, but also how we took what Mr. V said and applied it, and if we mess up, if we can get back on track,” Nafziger said.

They also sing a song from an approved list that they choose only after district.

For that song, Vandock chose “How Excellent” by George Frideric Handel.

“Mr V made a wise choice with that piece. It was challenging, and it sounded really good, but it was not as intricate as some of our others,” Nafziger said.

Next are two songs the choir has worked on since January.

One is “The Road Home,” by Steven Paulus.

“That one went pretty well. It has a lot of dynamic contrast,” Nafziger said.

“It’s our most difficult out of the three we had. Each voice part has different rhythms and notes, and a lot of different harmonies.

The last piece was “Keep Your Lamps,” by Andre Thomas.

“I think that one was just fun. Once we got the dynam- ics down, it sounded so cool,” Cody said.

Tressa Parsley, a junior and choir librarian, said it’s hard to tell how the choir sounds while on stage.

“When I sing, I can kind of hear the altos, but not really, because they’re on the other side of the risers,” Parsley said.

“It almost takes someone in the audience or Mr. V to tell us how we sounded.”

“You can only say how well you personally did,” Cody said.

After the performances, Wyse said he initially thought “my initial judgment was we did not get a I.”

“There are so many things that come into play,” Nafziger said.

“It all comes down to the adjudicator,” Cody said.

What did earning the superior rating mean to the students?

“It a great accomplishment,” Wyse said. “Mr. V said we had done everything we need to do in class. Now, we had to do it all at once, and we only get one chance to do it, and we succeeded.

While their schoolmates appreciate the accomplishment, “I don’t think they understand,” Parsley said.

“They don’t understand you’re not competing against other choirs,” Parsley said.

Cody, who was on the 2010 state softball team, said she has experienced state competition from both sides.

“We’ve taken two (vocal groups) to state for the past four or five years, and we’re overlooked a lot.

“To truly respect what we’ve done, you have to be in the group,” Cody said.

“Mr. Vandock has pushed us hard to do really well. Excellence is not something granted to you, you have to earn it,” Parsley said.

“We need to work hard at what we do, and when we work hard, you get things like ones at state.”

Nafziger, a senior, said over her five years of choir, the experience played a role in her life.

“I remember when I was in eighth grade, I wasn’t really sure about this whole singing thing, but I gained enough confidence to try out for the show choir and made it,” she said.

She advanced, singing solos and reaching other goals.

“I’ve seen myself grow,” Nafziger said. “I don’t know why I wouldn’t grow if I’ve stuck with something for five years, but I know if I stick with something, I’ll get to the place I want to be.”

She ended her high school career being part of a superior ranked choir.

Nafziger said, “That’s a nice way to go out.”