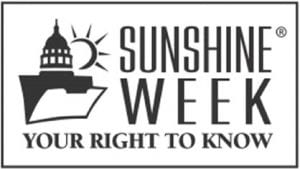 March 10-16 is Sunshine Week, the one week each year newspapers across the United States celebrate your right to know what’s going on with government.

You elect representatives to conduct the business of government. You hand them money, in the form of taxes, to do that business. In short, government works for you.

But if those representatives hide the business of government in a cloak of secrecy, then you don’t know, and can’t find out, what’s being done in your name.

The role of newspapers in America is to act as your watchdog on government, keeping you informed about governmental activities, good or bad.

That’s why sunshine laws, such as the Federal Freedom of Information Act and Ohio public meetings and public records laws, are important– they allow us to see what some try to hide.

Once you– the citizen– have the facts, you can go into the voting booth and cast a ballot to choose who represents you on government bodies such as Archbold Village Council or the United States House of Representatives, or fills elected offices such as county auditor and U.S. president.

We in the press realize the importance of our role, and we do not take it lightly.