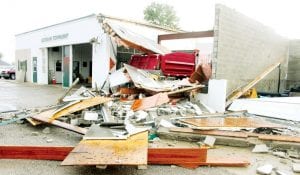 Thunderstorms and high winds damaged buildings and trees in the Archbold area, Sunday evening, July 1. Top: The roof was torn off three bays at the German Township Garage, at the intersection of St. Rts. 2 & 66 and Co. Rd. E, north of the village. Debris from the building was moved off St. Rt. 66. Right: a large pine tree in front of Fairlawn Haven was broken by the high winds.– photos by David Pugh and Mary Huber

A line of disorganized thunderstorms passed through northwest Ohio Sunday afternoon, tearing the roof off the German Township Garage and causing other damage.

Mark Steinwedel, meteorologist for the North Webster, Ind. office of the National Weather Service, said the storms were unrelated to storms that passed south of Archbold on Friday, June 29, causing severe damage and leaving hundreds of thousands without power.

“Sunday’s event was just a thunderstorm complex that would generate these ‘pulse storms,’ storms that boil up, and collapse,” Steinwedel said.

“When they collapse, the winds aloft fall down to ground level, creating wind bursts that can reach 70 to 80 miles per hour.”

The collapse of one thunderstorm can then spawn another in another location.

The storm went through the area about 5:30 p.m., Sunday evening. 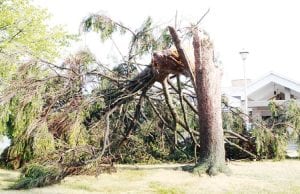 While on his way to the township garage to pick up equipment to deal with the trees, he said he received a second call “that our roof had blown off, and it wasn’t good.

“When I got there, I met one of the other trustees. It was not good,” he said.

The damage was to three north bays of the garage, which was a later addition to the original building, a former gas station.

A township truck and a tractor-backhoe combination were inside the building. Leininger said the truck and backhoe don’t appear to be heavily damaged, but they can’t get through the wreckage to get a good look.

Township officials are waiting on insurance adjustors, he said.

Chris and Jessica Buehrer were at their home at the intersection of Co. Rds. F & 25 that afternoon, when they “saw stuff flying sideways past the windows.

After high winds roared through the area Sunday evening, this is all that remains of a pole building at the home of Chris and Jessica Buehrer at the intersection of Co. Rds. F & 25. There were several trees and limbs blown down; in some cases, blocking roadways. A National Weather Service meteorologist said the winds resulted from a disorganized system of thunderstorms.– photo by David Pugh

“Our weather radio had gone off a few times, but they didn’t say anything about tornadoes.”

They grabbed daughters Abigail, 2 1/2, and Eliza- beth, 1, and headed for the basement.

When they came up from the basement, they noticed cars driving slowly past their house and discovered their large pole barn was all but destroyed. Two walls remain standing.

“Most of it’s in the neighbor’s pond and in the trees,” he said.

Michelle Roger reported a pop-up camper at the home of her mother, Pat Cousino, 8060 Co. Rd. 25-2, had been picked up, moved about 60 feet, and turned upside down.

Devin and Jenna Stuckey were watching the storm from the front porch of their home north of US 20A on Co. Rd. 25-2.

“The neighbors across the cornfield have a woods. When we saw the trees lay down, we went inside,” Jenna said.

She took their sevenmonth old daughter, Adelin, and went to the basement; Devin stayed upstairs to watch the storm.

Jenna said she saw dust spinning in a field.

“There were tornadic winds, but there wasn’t a tornado. It went by so fast,” she said.

It was quite an experience for Stuckeys.

“I hope we don’t experience another,” said Jenna.