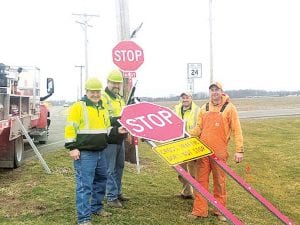 Joe Short, German Township trustee, said a Sunday, March 22 crash at or near the intersection of Co. Rd. 24 and Fulton County Rd. A-Henry County Rd. W had nothing to do with the recent removal of stop signs.

Speaking at the Monday, March 23 trustees meeting, Short said an individual driving a car on Co. Rd. 24 drove left of the centerline. The car came to rest in a field.

A dispatcher with the Henry County Sheriff Department said the crash occurred at about 5:05 pm.

Chris VonDeylen, assistant chief of the Ridgeville Township Fire Department, said the driver was taken to Fulton County Health Center as a precaution.

For many years, drivers on Co. Rd. A/W, the county line road between Henry and Fulton counties, did not stop at the intersection. Northsouth traffic on Co. Rd. 24 was required to stop.

Because Co. Rd. 24 carries more traffic than Co. Rd. A/W, the German Township Trustees, working in conjunction with officials from both counties, decided to change the traffic pattern to stop traffic on Co. Rd. A/W, and allow drivers on Co. Rd. 24 to continue without stopping.

At the recommendation of Tim Schumm, Henry County engineer, the intersection was first converted to a fourway stop, which was to be removed in a year.

All were changed Monday, March 16, or the following day.

Soon after the Sunday crash, comments began appearing on Facebook. Some criticized the decision to remove the four-way stop.

“It was dumb to take out the stop signs! Whoever was the one to ok it. You have now put many lives at risk!” one poster said.

Short replied to some of the comments online, and said he contacted everyone who posted by direct message.

Some complained there wasn’t enough warning that the traffic pattern had changed.

Short said there are 11 warning signs. Among those are signs stating, “Cross Traffic Does Not Stop.”

In a related matter, Kenneth “Skip” Leupp, trustee, said previously, ODOT was providing stop signs based on an ODOT safety grant. The grant would have required German Township to fund 10% of the cost.

However, Leupp said ODOT opted to fund the full cost of the signs.

The change was made possible by a 10.5 cents-pergallon increase in the tax on gasoline, which went into effect July 1, 2019.

Trustees also reviewed a document they will sign declaring themselves and township employees to be essential workers. The document is to be carried and presented to law enforcement officers in case they are stopped while traveling.

The meeting was the last for Keith Short, township fiscal officer, who, after 12 years in office, chose not to seek reelection in November 2019.

Keith Roth, who was elected in the Nov. 5, 2019 general election, takes over. Roth has attended several meetings, working with K. Short.

The next meeting is Monday, April 13, 6 pm, at the German Township building.