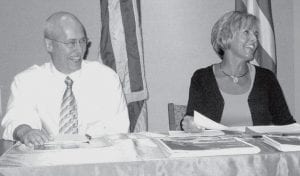 Thomas Stuckey, left, newly-appointed acting president of Northwest State Community College, and Joan Aschliman, board chairman, are at a press conference following a Thursday, Aug. 16, meeting. Stuckey becomes the interim president, a post he can hold for two years. There is no plan to search for a permanent president.- photo by David Pugh

Thomas Stuckey, acting president of Northwest State Community College, said there are “always bumps in any transition, but I’m not anticipating there will be any that will derail the train.”

Stuckey was appointed Thursday, Aug. 16, by the NSCC board. He takes over after Betty Young, who resigned from the NSCC presidency to lead Ashville Buncombe Technical Community College, Ashville, N. C. The board accepted Young’s resignation, effective Sept. 30.

The board met in executive session for about an hour and 15 minutes prior to accepting the resignation and appointing Stuckey to the presidency.

He is acting president until the board’s Friday, Oct. 5 meeting, where an interim president will be named.

Young said under the governance structure, Stuckey can remain acting president for up to 90 days before an interim is appointed.

Stuckey said his salary needs to be determined.

“Our focus is having school ready to start on Wednesday,” he said.

At this point, there is no plan to find a permanent president.

Joan Aschliman, board president, said the search for a permanent president will wait at least a year, and if everything goes well, it will be indefinitely.

“Tom has the credentials we need,” she said.

Young said having Stuckey as an interim president gives the board maximum flexibility as the state develops a new plan in higher education.

“Higher education in Ohio is at a pivotal point,” she said.

Ohio’s 13 universities and 26 community colleges will become the University System of Ohio, “all in system of higher education,” she said.

State officials will have a 10-year reform plan ready by March 2008.

Northwest State officials can see how the proposed plan impacts the college.

The college has a strategic plan in place, which Young has said passes muster with Ted Strickland, Ohio governor, and Eric Fingerhut, chancellor of Ohio colleges and universities.

Stuckey had been executive vice president at NSCC; the job will go unfilled, he said.

“We will have a cabinet of key administrators, who will work together as a team,” Stuckey said.

In addition to serving as an adjunct faculty member at Northwest State, he has also taught in the Master of Business Administrator program at Defiance College, Bluffton University, Goshen College, and Indiana Wesleyan University, Marion, Ind.

Stuckey was a consultant and evaluator of the Higher Learning commission and a member and president of the Millcreek- West Unity Local School District board from 1998 to 2005.

“He’s a go-to guy in every area,” she said. “He brings together a very eclectic group of experience. He’s a very strong leader.”